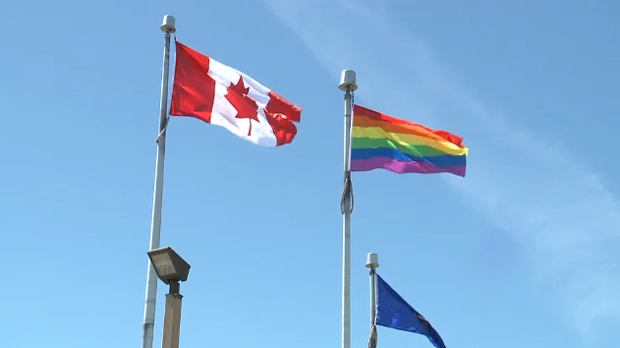 Canada's flag and the pride flag fly outside of Lethbridge College

Members of the YQueerL Society for Change and the Lethbridge Public Interest Research Group have jointly launched a petition calling on the federal government to ban gay conversion therapy of minors in Canada.

Representatives of the Lethbridge LGBTQ2 community say the therapy is a misguided practice that leads to isolation, rejection and depression and has contributed to teenage suicides.

In addition to calling for an outright ban in Canada, the groups are calling for a law prohibiting the transporting of minors outside of Calgary for conversion therapy and for the ban to be included in the Canadian Human Rights Act and the Criminal Code. Conversion therapy involves the use of external influences in an attempt to alter a person's sexual orientation.

“People should sign (the petition) if they support queer issues, especially queer issues in Canada,” said Devon Hargreaves, co-president of YQueerL Society for Change. “Put your money where your mouth is. Come out, show support, let’s get this banned.”

“Ontario’s done it. Manitoba’s done it. Alberta’s in the process of doing it now. Let’s take this federally.”

The petition, which was created by Hargreaves on Thursday, September 20 and sponsored by Sheri Benson, MP for Saskatoon West, requires 500 signatures before it can be presented in the House of Commons. The campaign will close on January 18, 2019. For additional information regarding the petition visit E-1833 Conversion Therapy.