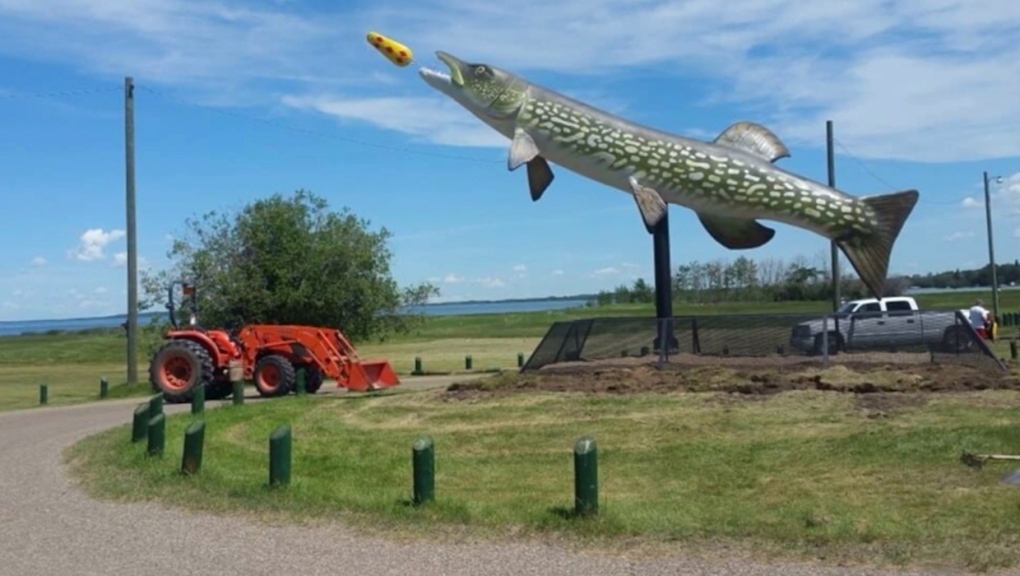 CALGARY -- The team at Dinosaur Valley Studios secured a giant northern pike jackfish on a trailer Tuesday and drove it from their East Coulee facility to the summer village of Rochon Sands.

The sculpture made the 144 kilometre trip unscathed but the unusual sight drew curious looks on the highway from other travellers.

The eight-metre replica of a northern pike jackfish was finished with time to spare ahead of its tentative Canada Day delivery date.

The sculpture's steel skeleton was covered in foam, shaped and then painted. To top it off, it has a Len Thompson fishing lure in its mouth.

Bronson Kozdas fabricated the metal and Eddie Dahm, a paleoartist, worked on some of the finer details to make the fish look as realistic as possible. Frank Hadfield, president of Dinosaur Valley Studios, says the project took about three months to complete.

"We’ve got a team of hot shot young guys that are really good at what they do. They’re super passionate about it,"  said Hadfield.  "I have a hard time getting them to take a break, they get so absorbed in it."

The massive sculpture was designed to face the elements on the shore of Buffalo Lake.

"We (had) to make it tough, it has to look good and it has to last a Canadian winter."

Dinosaur Valley Studios works closely with the Royal Tyrrell Museum and in the past it has made props for films including Texas Rangers, Knockaround Guys and Superman: The Movie.