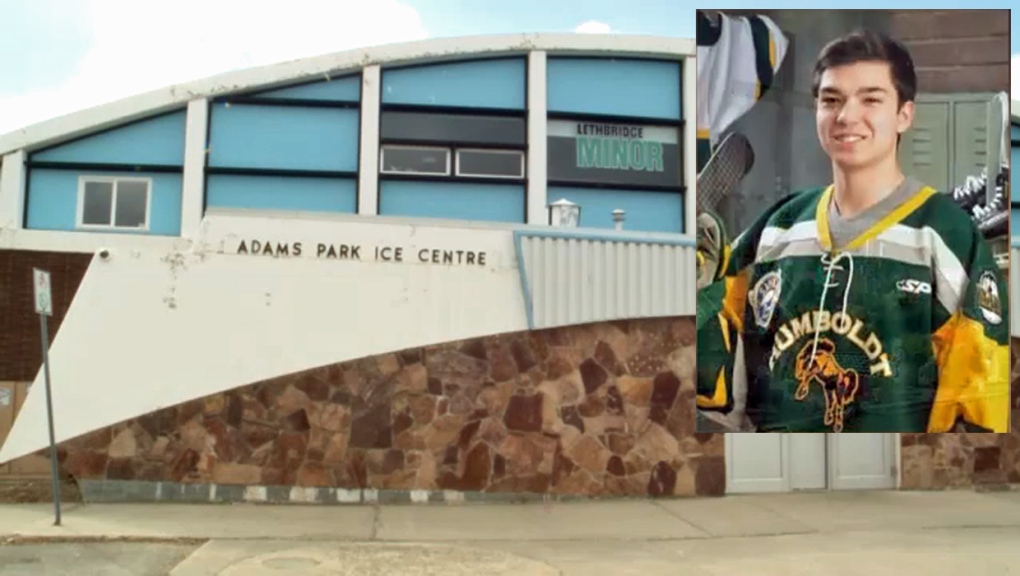 The Logan Boulet Arena in Lethbridge has been nominated for this year's Kraft Hockeyville contest. (File)

CALGARY -- The Lethbridge ice skating arena named in memory of Logan Boulet has been nominated for a contest celebrating hockey in Canadian communities.

A group of north Lethbridge elementary school students nominated the rink for Kraft Hockeyville 2020, and a chance to win $250,000 in funding to go toward arena upgrades.

Senator Buchanan Elementary School principal Lenee Fyfe says the idea of raising money for the arena renovations came from fifth grader Lucas Pasemko and another student, as they were returning from a class skating trip to the rink.

“Lucas told me a story of how they were spray painting the outside of the area, and when they came out the Logan Boulet sign was up.”

Fyfe says Logan and his friend wanted to know why they were only renovating the outside of the arena.

“They felt like they needed a great arena on the north side of Lethbridge, and were wondering what they could do to make things happen.”

She says the Senator Buchanan leadership group and advocates in the community began planning fund raisers to support renovations at the rink.

“And then when Kraft Hockeyville popped up on a Facebook feed, immediately we sat down and we put in the nomination.”

Pasemko, who is a goalie in minor hockey, says the arena needs to be upgraded, because it’s a special place to be.

“You get to play where Logan Boulet was. You got the sign on the arena, and the jerseys that he has worn.”

Logan Boulet’s family was quick to get behind the campaign with Logan’s dad Toby tweeting, “It was Logan’s favorite arena and where he started playing hockey.”

Toby says the north side hockey rinks are important to the community.

“It’s a place to gather, a place to meet people, to play hockey, it’s school skating for Buchanan and Galbraith.”

Fyfe says the Senator Buchanan offers an after school skating program in the fall and spring, where students and families can try skating for free. They applied for grants to get at least 100 pairs of skates and helmets, but need a nearby rink to make the program viable.

The arena, originally known as the Adams Ice Centre, was built in the early 60’s. Last October, it was officially renamed the Logan Boulet Arena, as a tribute to the 21-year-old hockey player who died when a semi-tractor-trailer crashed into the Humboldt Broncos team bus, killing 16 people and injuring 13 others.

Logan had signed his organ donor card on his birthday a few weeks before the crash. After the incident, his organs benefited six people across the country, sparking the Logan Boulet Effect and inspiring more than 200,000 Canadians to register as donors.

At the renaming ceremony, officials also unveiled a Logan Boulet display case which features the young player's Humboldt Broncos jersey, his minor league hockey jersey and skates as well as pictures and documents.

“It’s a beautiful building. It has got great bones. It just needs a little lip stick and rouge,” he said.

Fyfe says the immediate goal is to make it to the top four, which comes with a $25,000 prize. The group is inviting other schools, local hockey teams, and the community to join in, by going to the Hockeyville website at www.krafthockeyville.ca and sharing their pictures and inspiration stories.

The winning community scores the opportunity to host an NHL game and $250,000 in funding to go towards arena upgrades.

The nominations for Kraft Hockeyville 2020 end on Feb. 8 and the winner will be announced Mar. 28.

Last year's winner was Renous, N.B., but a hamlet in Lac Ste. Anne County, northwest of Edmonton, won a runner-up prize of $35,000.

The arena in Rich Valley, Alta., a community of about 600 people, used the funds to buy hockey equipment and upgrade their facility.