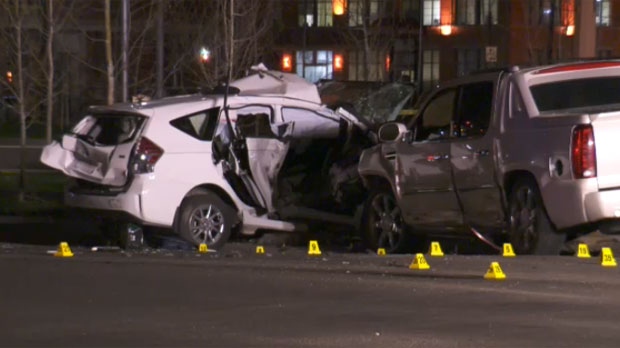 Alejandro Montoya, the 20-year-old facing charges of impaired driving causing death in connection to a May crash on Macleod Trail, has been released on $20,000 bail.

The amount will consist of $10,000 in cash as well as $10,000 in equity from the home belonging to Alejandro Montoya’s parents.

Conditions of Montoya’s release include:

“It was a lengthy decision by the judge,” explains defence lawyer Alain Hepner, Montoya’s legal representative. “He’s released under very strict conditions. (The judge) basically found that to release this man under these circumstances, in spite of the brand new decision by the Supreme Court of Canada, did not offend the administration of justice or would not have the public lose confidence in the administration of justice.”

In the early morning hours of May 2, 2015, a collision at the intersection of Macleod Trail and 12 Avenue Southeast involving a Cadillac Escalade, a Honda Civic, and an Associated Cab, claimed the lives of the two occupants of the taxi.

The deceased have been identified as 46-year-old Amritpal Kharbanda and 25-year-old Jillian Lavallee.

Prior to the bail hearing, Dan Lavallee, Jillian's father, said he expected Montoya would be released.

“I look at the history of drunk driving in Alberta and I see the people get bail pretty easy,” said Dan Lavallee, Jillian’s father. “In my opinion, it’s no different that stabbing, shooting or beating someone up, and yet, in Alberta, we seem to have a culture that says it’s fine to do that and walk away from the personal responsibility.”

Montoya is scheduled to appear in court on June 22, 2015 for the scheduling of a preliminary inquiry.