A Severe thunderstorm watch was issued for the City of Calgary and surrounding areas in the morning and that was upgraded to a warning a few hours later.

Environment Canada said conditions were favourable for the development of severe thunderstorms on Wednesday afternoon.

The weather agency says the thunderstorms had the potential to produce hail the size of loonies, wind gusts up to 100 km/h and as much as 75 mm of rain in some areas.

“Just before 1:00 p.m. today, Environment Canada issued a severe thunderstorm warning for the City of Calgary. You will notice that that warning was downgraded to a watch and the n it was upgraded again to a warning. One of the beauties of living near the mountains is we can expect this weather to constantly change so this will be a dynamic situation throughout the afternoon and we will continue to monitor and update as necessary,” said Deputy Chief Susan Henry, Calgary Emergency Management Agency.

City officials have asked residents to avoid driving through large puddles and to watch out for debris on the roads.

“Please keep in mind that thunderstorms can cause sudden downpours and quickly overrun streets and underpasses with water. Fast moving water can move across roads and quickly sweep vehicles away,” said Henry.

The system moved off to the east at about 4:00 p.m. and is expected to weaken by the evening.

The severe weather has impacted flights at the airport and offcials are asking travellers to check the status of flights. A lightning advisory was lifted at about 4:50 p.m. and crews are working to get things moving again.

For the latest watches and warnings from Environment Canada, click HERE.

Here's a few images from our team and our viewers.

Here's what it looks like at 5th between 9th and 10 ave....btw this car is a rental! @CTVCalgary pic.twitter.com/OrRRKX083I 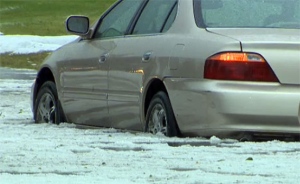