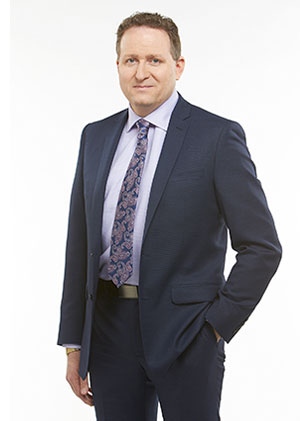 Shaun’s journalism career as a reporter, producer, anchor and assignment editor stretches across the prairies. His first news job was as a reporter with the Saskatchewan Valley News, the weekly newspaper in Rosthern, Sask. His television career took him to Swift Current, Prince Albert, Saskatoon, Regina, and Edmonton, before he arrived at CTV Calgary in 2006 to produce the 5:30pm news.  He now works as a producer, video journalist and anchor.

Shaun has covered major breaking news events for CTV including the Fort McMurray wildfires, where he told the stories of evacuees, firefighters and volunteers.

He’s also had the chance to take on some special projects, and explore issues in-depth. He hosted and produced a weekly agriculture/rural life program, Country Corner, in Prince Albert. He wrote, hosted and produced a half-hour documentary, Over the Limit, which shared the personal stories of those affected by drunk driving – crash victims, police and the drunk drivers. He also visited Camp Pendleton in California for a series on Canadian soldiers training with U.S. Marines to become peacekeepers in Bosnia and Croatia. And, he produced a series with Darrel Janz to mark the 50th anniversary of CTV Calgary in 2010.

Shaun has gained special expertise in reporting on topics such as immigration, military veterans, politics and sports, especially soccer.

Shaun anchored a newscast that won the RTDNA’s spot news award, when a Prince Albert apartment building went up in flames. He also won the RTDNA’s Dr. G.R.A. Rice Scholarship in 1992 for the best TV news story by a student in Canada. In 2016, he did a story on a team of Australian hockey players that was a finalist for an RTDNA award in the sports feature category.

Shaun has a Bachelor of Arts in Journalism and Communications from the University of Regina. He won the James M. Minifie Award as top graduate.

Shaun is fluent in English, speaks French at an intermediate level and has a Fransaskois background.

Besides journalism, Shaun’s other passion is soccer. He plays the game and is a senior referee in Calgary. Attending the men’s World Cup in Brazil in 2014 and the women’s World Cup in France in 2019 were major thrills. He and his wife also enjoy skiing and hiking in the Rockies, volunteering and gardening.