CALGARY -- Using a mouthguard could lower the odds of the most common injury in youth hockey, according to Calgary researchers.

A new study by the University of Calgary published in the British Journal of Sports Medicine looked at youngsters who got concussions while playing hockey and others who got hurt but did not have a concussion, and found a 64 per cent reduction in the odds of concussion when mouthguards were worn.

The lead author in the study said more research is needed but the devices might provide physical protection in two different ways.

“The other... is the activation of neck musculature so the impact doesn’t accelerate the head as much.” 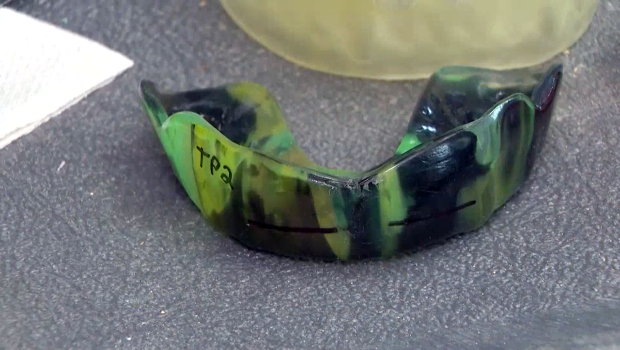 Hockey Calgary has had that policy for years but the executive director says it’s difficult to enforce.

“Because it’s not an official playing rule of Hockey Canada, the referees can’t can’t provide a penalty for it," said Kevin Kobelka. "so it’s up to the coaches, the mangers, (and) the parents to self-enforce.”

“But," he added, "we think it’s worthwhile, so hopefully the parents out there and kids out there will see the benefit.”

Researchers also found no significant advantage whether the player was wearing a custom-fit mouthguard or an off-the-shelf version.