A 30-year plan for the future of Spruce Meadows includes a 12,000-seat soccer stadium and field house as the venue evolves from its current equestrian-specific focus.

Spruce Meadows presents a new area plan to Foothills County every 10 years which passed its first reading at a meeting last week.

“Our intentions and ideas in the area structure plan to include a future possible site for a stadium to hold 12,000 people,” said Ian Allison, the senior Vice President at Spruce Meadows.

“They came to council with a great proposal.”

“This is a 30-year plan, so people need to realize it’s not all going to happen at the same time,” Alger said. 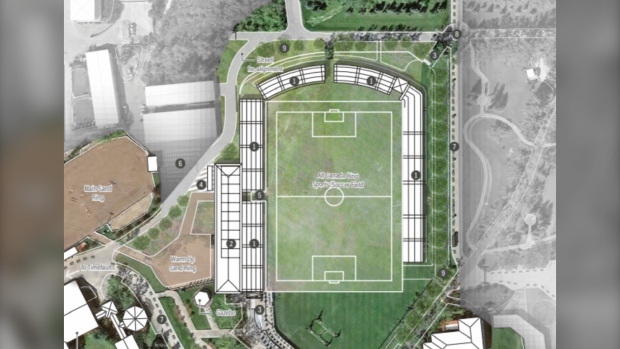 In its first season, Cavalry FC has quickly proved itself to be the real deal. The team is sitting in second place in the CPL fall season, having finished first in the summer season. And in July, they became the first-ever CPL team to beat a Major League Soccer side, defeating the Vancouver Whitecaps to advance to the Canadian Championship semifinal against the Montreal Impact.

The team has quickly built a loyal following.

“We’re 100 days into our journey in the CPL and so far it’s been a concept, idea and a result that’s been embraced by sports fans around here,” Allison said.

Though the team has been positive on the field, Alger says some residents are concerned about off-field problems a new, larger stadium may cause.

“There’s been a little bit of pushback from some of the neighbours involving increased traffic,” Alger said.

“They’re working with the neighbours and I don’t foresee any problems in the future.”

If everything goes according to plan, a new stadium could be built in the next six to 10 years at the current site of the All-Canada Ring.