New species of massive winged reptile once soared over Alberta 76.5 million years ago

As tall as a modern giraffe and weighing as much as a cow elk,  the carnivorous Cryrodrakon Boreas is hard to imagine today. But roughy 76.5 million years ago, it spread its 10 metre wingspan over Alberta’s skies as it searched for small dinosaurs to eat.

It’s believed to be the largest flying reptile to have ever lived.

The discovery of the new species was published Monday by three authors, including Dr Francois Therrien, curator of Paleo-Ecology at the Royal Tyrrell Museum of Palaeontology.

"This was one of the largest Pterosaurs to have ever lived, " Therrien said, in an interview, "and it lived right here in Alberta.

"Because they walked on all fours, they could actually catapult themselves up in the air and start flapping," he added. The animals could divide their time between foraging on land for meals such as baby dinosaurs, mammals, and lizards, he added, and then, "if a big Tyrannosaur came too close, that's when it probably just launched itself up into the air and started soaring on the thermals." 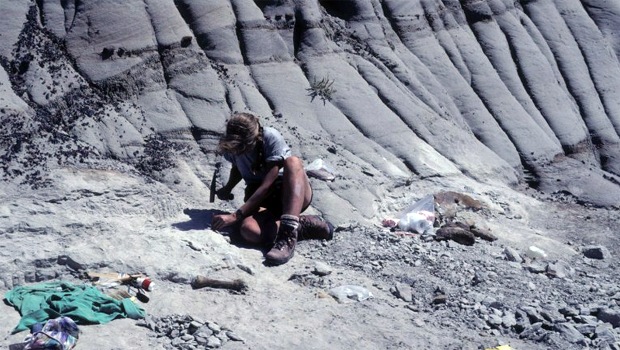 Bones from the newly identified species were first uncovered in Dinosaur Provincial Park in the early 1990’s but it’s taken years of study for the research team to be confident they have a new species.

It’s Latin name translates as “Cold Dragon of the North Winds”, and like the dragons depicted in the popular television show Game of Thrones, they probably walked on all fours when on the ground hunting for food. But like bats, they would leap into the air to take off, with a wingspan similar to a small airplane.

The species is now known from a collection of wing, neck and leg bones. No skull has been found, but researchers believe it had a long neck and a head that could reach up to two metres in length.

The trio believe the giant reptile could have migrated vast distances, possibly as far as Europe in its search for food or mates.

"Animals like that lived in Alberta, maybe seasonally," Therrien said. "They would fly across the Atlantic to Europe, and then come back later in the year."

"We had palm trees," Therrien said, "lots of very lush vegetation, and big rivers flowing all over Alberta."

As far as being a 21st century dinosaur hunter goes, Therrien said the chase doesn't grow old, even if the bones he's searching for do.

"The thrill of the discovery is really what drives paleontologists," he said. "It's always finding something new, something that nobody ever knew before.

"When you go in the Badlands and you make a discovery," he added, " You realize that you're the first living being to see those bones since the animal died 76 million years ago."