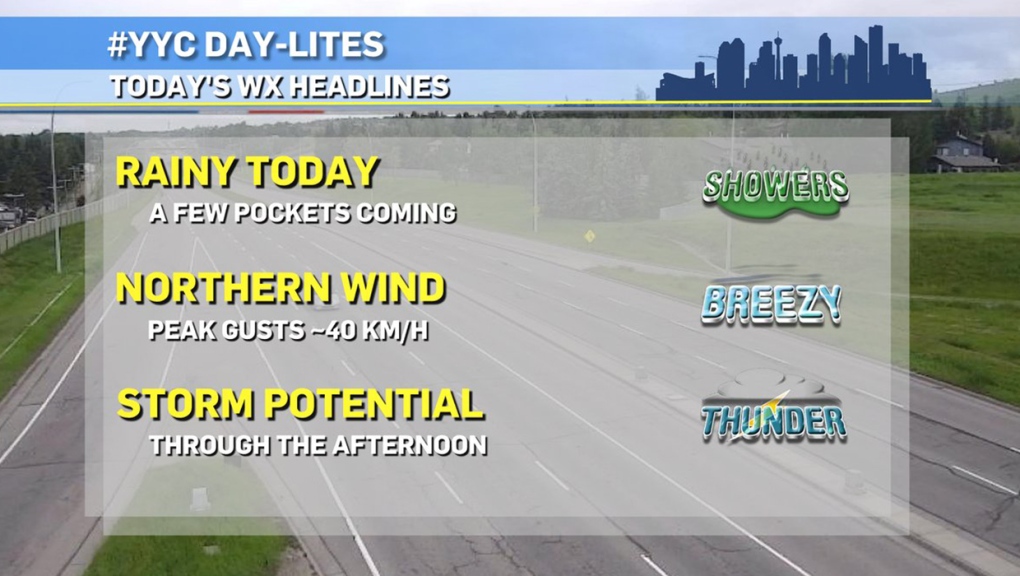 CALGARY -- We should start with yesterday. Most forecast models were in agreement that Calgary would be among communities to see peak gusts reach 40 km/h with a strong westerly component. Brooks did it, as did Lethbridge. Banff got to 39 km/h. Calgary, though, in spite of a razor-blade of a chinook arch yesterday, saw peak wind out of the SSW at a mere 15 km/h. That did a number to our temperature base, as did the lack of sunshine from this chinook hanging around.

Overnight, we were watchful of a colder airmass pushing in from the north. Our upper air pattern is setting up to deliver isolated thundershowers early in the afternoon, which will have plenty of runway in the form of CAPE (Convective Available Potential Energy, so, “storm fuel”). One of the major forms of that energy is temperature. In Calgary’s case, we’ve been pinned down by cloud cover and are still seeing that as of this writing, with some periods of sun possible by late morning. East of Calgary, however, this cloud has not been an issue. Not by a long shot. Medicine Hat, for instance, reached 30.9° yesterday, clocking their previous record high from 2015 of 28.9°.

So what happens when that roiling instability passes over our marginally cooler area (today’s high 22°) and goes to a zone of much warmer air, which is rising? These storms could mature rapidly as they roll off of the foothills, presenting the possibility for golf ball sized hail. 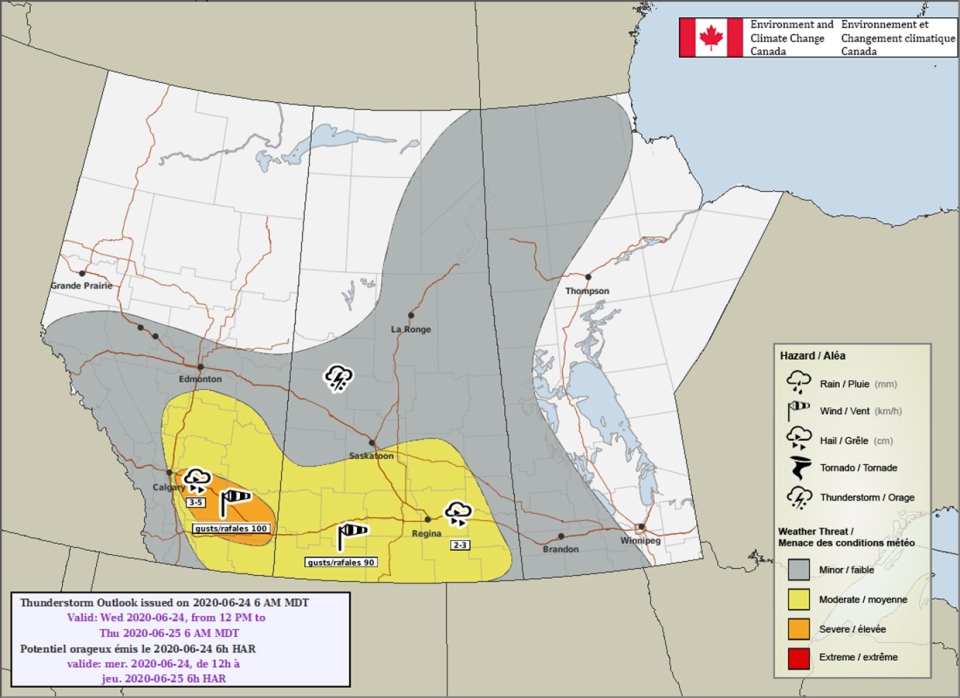 The outlook above shows it best; storms will slide due east, strengthening as they go. Calgary isn’t completely out of the woods on severe weather but, as it’s been, the most likely chance for severe weather is in the east end of the city. Another element: they’re not projected to move all that quickly. That could indicate prolonged localized heavy downpours as start of these organized convective bands.

A lot of forecast models are pushing the potentially worst wave of activity completely north of Calgary, instead setting the center toward Red Deer. The peaks and valleys of the Rockies make for tough forecast model prediction as to precisely where we could see these bands build from the foothills.

Some quick notes on what follows: we have a weak upper ridge trying and failing to build in after the wave of activity today. That keeps things dry tomorrow before a large trough swings down from off the Gulf of Alaska, cooling us and opening us up to rain showers and perhaps a non-severe thunderstorm into the weekend.

A little fun for us – I tweeted this out yesterday. Here’s a weather term you’ll likely never hear me use: Thunderplump! Even if it applies, it might just come out as silly.

From off the foothills today and tomorrow, Alberta may see some thunder-plumps.

Two pictures today: one of a chinook arch, taken by Ron out of Calgary, and the other by Marion, also out of Calgary, of mammatus clouds in the northeast! Mammatus clouds usually trigger as a result of instability and are often found beneath cumulonimbus clouds (storms!), though yesterday, we were spared of storms. 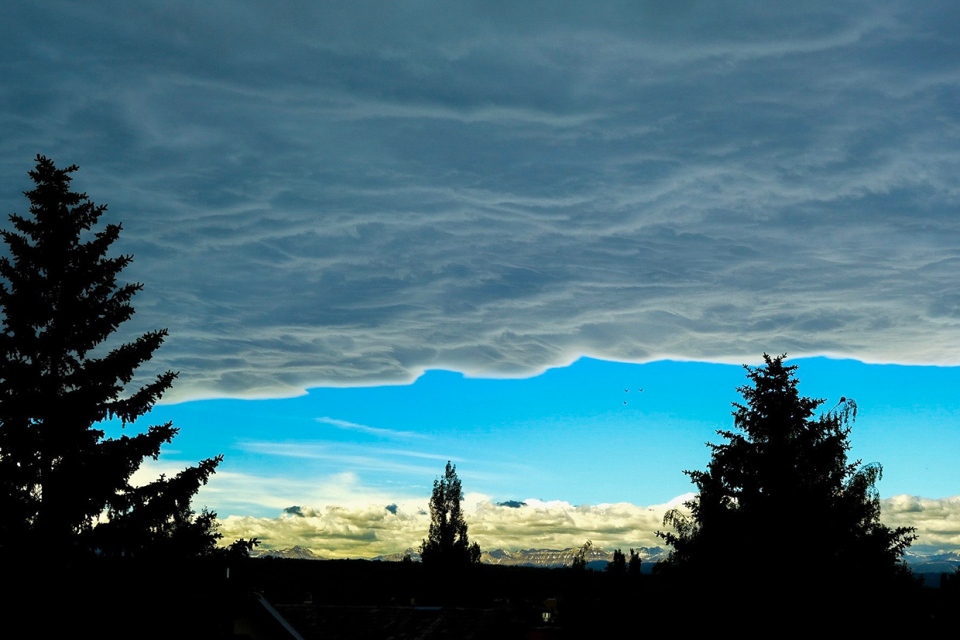 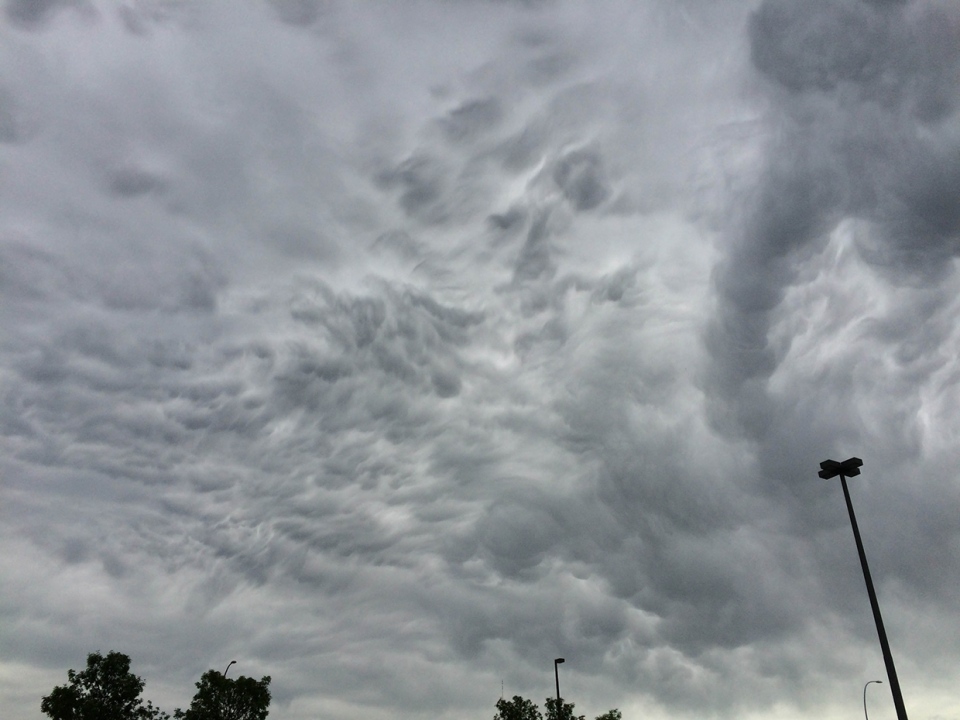 You can submit your weather photos here!