Calgary police are investigating another incident of gun violence in the city, this time in the southeast community of Radisson Heights/Albert Park.

Police told CTV News that officers responded to a scene on Radcliffe Drive S.E. after reports of a shooting.

CPS officials confirmed to CTV News Wednesday morning that a man, who is known to police, arrived at the Peter Lougheed Centre suffering from a non-life-threatening injury a short time after the shooting and it's believed he is connected to the incident.

One witness, who asked to be named only as Jeff, told CTV he was scootering home from work when he heard what sounded like fireworks and then saw a white car "zip out of the parking lot."

He called the experience "surreal."

"Especially, you're right there when it happens ... you kind of double-check yourself and everything to make sure you're all good," he said.

Jeff lives nearby, and said, "It feels like we're in gangland now."

"It used to not be like this. But especially in this neighbourhood, I guess, it's kind of getting to be the norm."

As of Tuesday night, no arrests had been made in connection with the incident.

This is the city's 97th shooting this year. 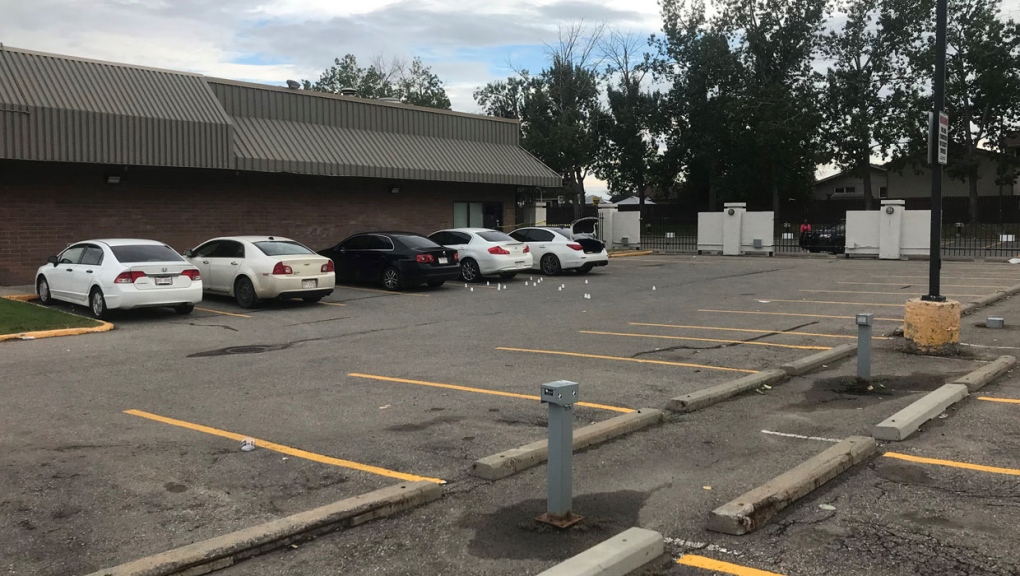 It's also the latest in a string of violent acts in Calgary that have police worried about public safety.

"This type of pace for shootings is concerning to us," said Dep. Chief Chad Tawfik with the Calgary Police Service (CPS) on Tuesday.

On Monday, police were called to respond to a shooting in Pineridge that officials say involved two vehicles. Shell casings were found at the scene, but no one was reported injured and no buildings were struck.

Tawfik said they typically see an increase in shootings in July and August, but this is different.

"The sequence of events in the way that they’re unfolding is concerning to us, and we are following up with additional investigative tasks and resources to address it," he said.

As for how this compares to other Canadian cities, Edmonton has reported 93 shootings so far this year, compared to 99 at this time in 2021.

Meanwhile, Ottawa has seen 40 so far and Toronto has reported 253 shootings and firearm discharges.

Doug King, a justice studies professor at Mount Royal University, said size of the city isn’t what matters when comparing these things, but rather who lives there and what deeper issues those cities face.

He said Calgary, Edmonton and Vancouver are closely connected.

“Drugs, weapons, prostitution is all part of that kind of nexus of three cities and lo and behold, it’s actually Kelowna that is kind of the centre of distribution into Alberta,” King said.

While the majority of Calgary’s shootings are targeted, only about a quarter of them are related to organized crime conflict, according to police.

“The other 75 per cent typically is around interpersonal conflict, can be due to a number of factors, whether it be drug-related or other conflict that has arisen between parties,” Tawfik said.

“To tie it directly to organized crime, we have to know that the individuals involved are affiliated with an organized crime group, so hence the differentiation, and it’s a fairly high threshold to be put in that category.”

Calgary police are still looking for suspects in many of the incident, but add that many of the shootings were committed with illegally-obtained guns.

Tawfik says authorities have seized more than 300 guns during investigations since the beginning of the year. They range from non-restricted rifles and shotguns to restricted firearms like handguns.

Meanwhile, Dr. John Kortbeek, a trauma surgeon who has seen his fair share of patients suffering from gunshot wounds says that gun crimes should be treated as a public health problem.

“Then we can approach it like we do with any other public health issue, which is identify what are the causes, what are the drivers that are increasing the number of firearm injuries and then what interventions can we perform that can reduce the burden of injury?”

Kortbeek adds that firearm injuries take up a lot of health care resources.

“Victims of firearm injuries often sustain severe and multiple injuries. They’re very sick people. They require a huge team to look after them and they’re resource-intense,” he told CTV News.

“It also affects individuals, not just at the time of their injury, but for years afterwards. Many of them have long-term disability, assuming they survive. And it affects their families, so it has multidimensional effects on the community, on patients, on the hospital system.”

The recent string of shootings are also taking up a lot of police resources as investigators work around the clock to find the suspects.

“They’re working up all these files to bring people to justice on it. So, those offenders that are out there, certainly know that we’re on the lookout for them,” Tawfik said.

(With files from Nicole Di Donato)