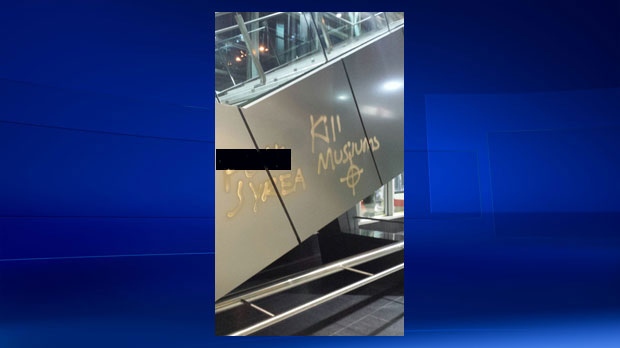 Graffiti on the escalator of the Tuscany LRT station on Thursday afternoon (photo: Bhaveek Makan)

The Calgary Police Service and Calgary Transit are investigating vandalism spotted at a northwest LRT station, on vehicles in the station's parking lot and on the exterior of a CTrain late Thursday afternoon.

According to Calgary Transit spokesperson Ron Collins, the transit call centre received a complaint at 5:46 p.m. notifying them a CTrain had been tagged. Transit officials located the train at the Sommerset Station in the southeast and an undisclosed number of train cars were removed from service.

“This was a horrible act and nobody expects something like this to happen,” said Ron Collins. “We took immediate steps to remove the graffit as soon as it was reported to us.”

Anyone with information about the vandalism is asked to contact the Calgary Police Service, 403-266-1234, or Crime Stoppers.