CALGARY – Calgary police are continuing to search for a suspect after a shooting in the northeast community of Monterey Park.

Officers responded to the 100 block of Laguna Close near Catalina Boulevard N.E. at around 3 a.m. following reports of a home invasion and the firing of shots. A shot was fired at, but missed, a CPS member during the investigation.

When the suspects opened fire, one of the responding officers fired their weapon.

Two men were arrested on Saratoga Close N.E. following a brief foot chase and are being questioned in connection with the incident. Police confirm to CTV News that a third male was seen leaving the area. It’s not known if he fled on foot or left in a vehicle.

No officers were injured during the response but one of the suspects was hurt. It's not known how he was hurt during the incident.

Several side streets and alleyways were cordoned off by police but have reopened to vehicles and pedestrians. As of 7 a.m., the intersection of Laguna Close and Catalina Boulevard remains blocked off.

Evidence markers have also been placed on the ground to indicate where shell casings have landed.

Jodi McNabb heard a strange noise in her backyard early Thursday morning and, after checking on her children, a harrowing noise at the sidedoor of her home sent her into hiding. "All of a sudden I heard 'boom, boom, boom, boom' and the whole house shook," said McNabb. "I ran to my room and just stayed there and listened and listened."

Chrisopher Gomez lives nearby and says his wife was stirred awake by the sound of six loud shots.

"She heard something and first thing it was three gunshots and then, after that, three gunshots more," said Gomez. "She woke up me and said 'what's going on?'."

"I'm suprised because, here in Monterey Park, it's been a very, very quiet place."

The officer who fired their weapon is a seven-year member of the CPS and has been placed on 30-day administrative leave.

Another neighbourhood resident, Ashvin Viraini, got a surprise when police finally allowed him to check the condition of his car Thursday afternoon.

"Someone shot like three bullets in our car," he said. "Two on the driver's side, and oneon the rear side."

Viraini showed CTV the damage, while expressing gratitude that everyone in the community was safe. 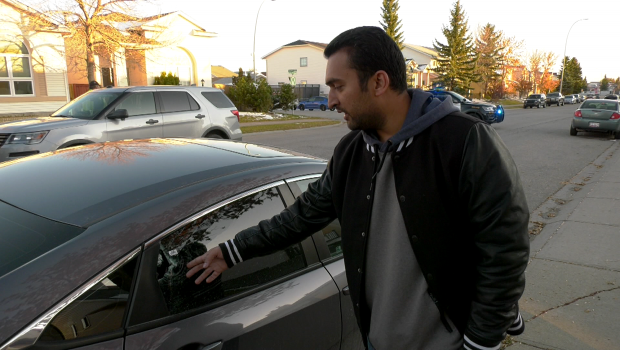 Meanwhile, police are still looking for a third suspect in connection with the incident. He is described as: