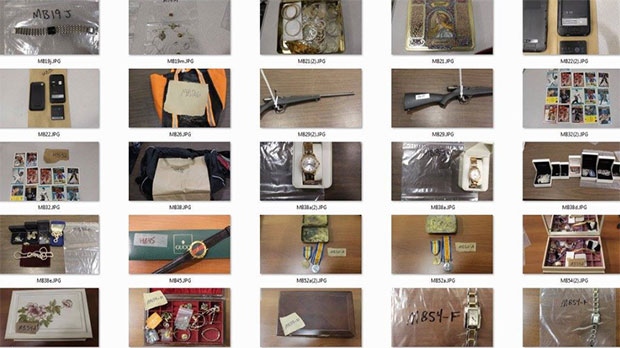 Over 400 items of suspected stolen property were seized during the search warrant.

Two men are facing almost 70 charges in connection to a series of break and enters that have happened in Calgary and southern Alberta over the last few years..

Police were called to a break and enter at a residence on Evergreen Way S.W. on Tuesday, September 8 and the resident was able to provide a detailed description of a suspect vehicle as it was leaving the scene.

That information led police to a home on Coville Circle N.E. where a search warrant was executed and two men were arrested.

Investigators say the total value of the property is believed to be well over $100,000 and the value of the drugs is estimated to be about $18,000.

City police and RCMP have linked the recovered property to over 30 residential break and enters that have happened in Calgary and the surrounding areas between 2003 and 2015.

Some of the items have been returned to their owners but police are still trying to locate the owners of hundreds of items.

Anyone who believes their stolen items are among those pictured is asked to contact investigators at a special tip line, 403-428-6888, or via email at seizedproperty@calgarypolice.ca.

Anyone with information on these or other break and enters is asked to contact the non-emergency line at 403-266-1234, or crime stoppers using any of the following methods: