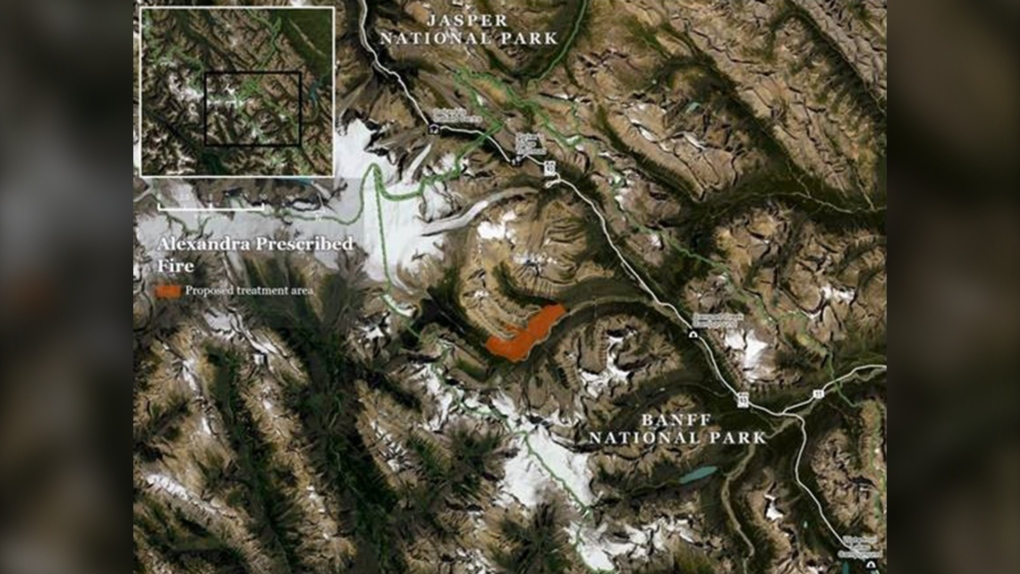 Parks Canada is set to spark a prescribed wildfire in a section of Banff National Park as part of an ongoing effort to restore habitat for wildlife and select trees.

The Alexandra Valley fire, expected to cover 1,571 hectares, will take place in an area west of the Icefields Parkway and east of the Alberta-B.C. boundary.

Flames, smoke, active fire crews and helicopter bucketing may be spotted in the region during the prescribed burn and are no cause for alarm, said officials in a news release,

The attempts to restore a natural fire cycle to the area began in 2020 and this year's effort could begin as early as Thursday if conditions, including forecasted weather, will permit the dispersal of smoke into the atmosphere.

During the fire, Parks Canada will close the following areas to the public:

The restoration of the fire cycle to the valley is expected to enhance grizzly bear habitat and restore whitebark pine habitat.

As of Thursday, a fire ban remains in effect for Banff National Park. The prescribed fire falls outside the ban as is it will be conducted under the direction of fire specialists.

DBRS Morningstar estimates hurricane Fiona will cause between $300 million and $700 million in insured losses in Atlantic Canada for a record high in the region.

Explosions rattled the Baltic Sea before unusual leaks were discovered on two natural gas pipelines running underwater from Russia to Germany, seismologists said Tuesday. Some European leaders and experts are pointing to possible sabotage during an energy standoff with Russia provoked by the war in Ukraine.

BREAKING | Up to 23 people taken to hospital after exposure to hydrochloric acid in St. Catharines

Up to 23 people are being taken to hospital in St. Catharines following a hazardous workplace incident on Tuesday, Niagara Health confirms.

Police have arrested another man in connection to an alleged violent attack on Elnaz Hajtamiri in a Richmond Hill, Ont. parking garage just weeks before she disappeared in January.