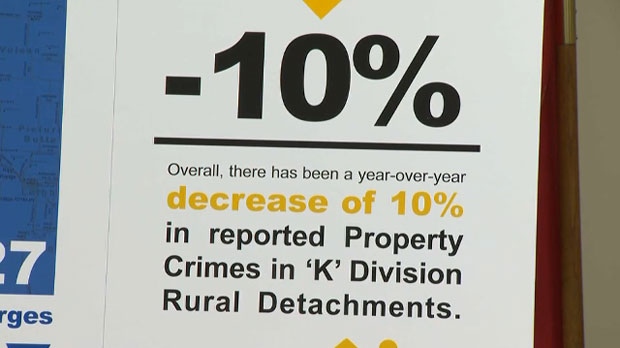 Alberta RCMP’s new crime reduction units (CRU) are paying immediate dividends in their first months according to RCMP officials and the Minister of Justice.

“Since the crime reduction units became fully operational, we have made 263 arrests, executed 253 warrants and laid a total of 1,227 charges,” said Deputy Commissioner Todd Shean. “That ratio of charges, resulting from only 263 arrests, is reflective of the type of criminals our CRU units are targeting; repeat offenders who are responsible for the majority of the crime in the province.”

“We are confident that with a robust, intelligence-led crime reduction strategy, we will be able to reduce crime rates in every category, in every corner of this province.”

A crime reduction unit, consisting of a combination of seasoned officers, criminal analysts and civilian staff, was put in place in each of the RCMP’s four districts across the province and the units were operational in February of this year. “These units have the experience, investigational skills and flexibility to quickly mount operations that lead to arrests and support local police resources in their operations with minimal disruptions.”

The units were created in response to citizen concerns regarding crime in rural areas and were established following the Government of Alberta’s $10 million investment as part of a seven-point strategy plan for combatting rural crime.

““The realities of policing in rural Alberta are particularly difficult,” said Ganley. “Our geographical spread means criminals can target isolated properties without detection. It also means police have a larger area to cover which can affect response times.”

“We can’t change Alberta’s geography. We can, however, listen to its citizens and take concrete action.”

As part of the RCMP and Government of Alberta’s rural crime strategy, a specialized unit, referred to as callback unit, have been created to handle non-emergency calls.

“Since the callback unit’s inception on February 15, the callback unit has already processed more than 912 calls from Albertans,” said Shean. “These calls, if taken by a police officer, represent 2440 person hours or almost a year-and-a-half’s worth of patrolling Alberta’s streets and roadways.”

The introduction of the new strategy has allowed officers to focus a significant portion of their time on investigations into crime and working alongside other agencies and members of the public.

Both Ganley and Shean agree that the aim of the strategy is not to increase arrest numbers but to address the issues that create repeat offenders.

“There are situations in which a lot of property crime in an area can be solved simply by getting someone into drug treatment or by simply getting someone housed,” said Ganley. “That’s why I’m so excited about this strategy.”