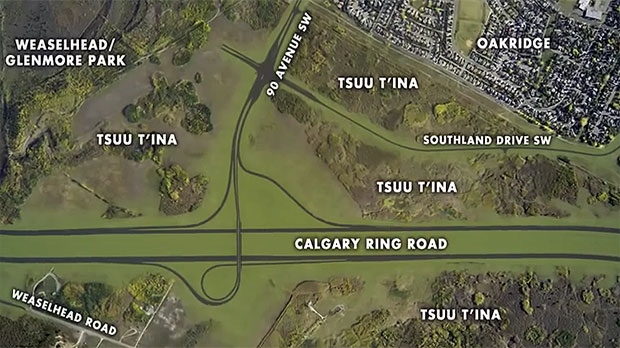 The southwest section will include 21 kilometres of roadway with six and eight lanes. (Government of Alberta)

Officials from the provincial government and Tsuu T’ina Nation announced on Tuesday that construction on the southwest portion of Calgary’s ring road will go forward and will be finished within the next seven years.

The land needed to complete the roadway was officially transferred to the province by the Tsuu T’ina Nation on May 22.

“We want to provide a safe, modern highway network that will improve the commutes of Albertans in and around the city of Calgary and support economic growth in the province,” said Brian Mason, Minister of Transportation.

“Our goal with the Southwest Calgary Ring Road was to create economic opportunity for future generations at Tsuu T’ina. As per the agreement, today’s announcement is an important milestone,”  said Chief Roy Whitney, Tsuu T’ina Nation.

The federal government approved the land swap deal in May authorizing a change in the nation’s boundaries. Under the agreement, over 2100 hectares will be added to Tsuu T’ina lands and 428 hectares will be handed over to the province for the road.

Officials say the new road will reduce traffic congestion in and around the city and also ensure the safe transportation of goods and people across the southern part of the province.

When it is complete, the Calgary ring road will accommodate between 80,000 and 100,000 vehicles per day on some sections and will provide motorists with more than 100 kilometres of free-flow travel.

The province says it will honour the agreement and will complete construction of the southwest section within seven years.

Alberta’s Wildrose Party says the announcement failed to provide final costs for the southwest section and lacked details on when the final leg, between Sarcee Trail and the Trans-Canada, will be finished.

“Drivers in our cities need relief. As Calgarians know all too well, completion of the last section of the ring road is necessary to reduce strain and backlog on city streets,” said Wildrose Leader Brian Jean. “I am pleased to see that the long-overdue process to complete the southwest portion of the ring road is going forward, but dead-ending the road just doesn’t make

The Wildrose says a timeline is required to ensure the final leg is built in a timely manner.

For more on the southwest ring road, click HERE.