DRUMHELLER -- The Royal Tyrrell Museum of Palaeontology houses one of the world's largest displays of dinosaurs and is Canada's only museum dedicated exclusively to the study of ancient life.

But what you don’t see is the large amount of fossils stored in rows of shelves and cabinets in the prepared collections storage room.

That’s where University of Calgary PhD student Jared Voris has spent years studying all the tyrannosaur bones. He was looking into the evolution of the species for his masters and realized there was much more work to do on the subject and made that the focus of his PhD.

Voris found one set of fossils that stood out from the four species of tyrannosaurs known in Alberta.

"I realized that there were features that made it completely unique from all those other ones so that was what instigated the discovery of this new species was just kind of comparing those to all the other tyrannosaur fossils we have found here in the past," said Voris.

What Voris saw that differed was vertical ridges that run the length of the upper jaw.

"So we started to work on identifying that as the new species which we recently named as thanatotheristes degrootorum," said Voris. 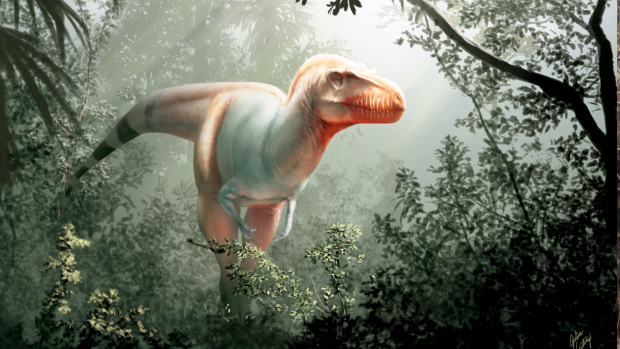 The name of the new tyrannosaur alludes to its role as an apex predator and was inspired by Thanatos (Greek god of death) and theristes (one who reaps or harvests). The second part of the name honours the family who discovered the fossils.

John De Groot is a farmer and paleontology enthusiast who found the fossil skull fragments while hiking near the hamlet of Hays in southern Alberta in 2010.

"The jawbone was an absolutely stunning find," said De Groot in a statement released Monday. "We knew it was special because you could clearly see the fossilized teeth."

Darla Zelenitsky is an assistant professor at the University of Calgary and is supervising Voris for his PhD. She says it’s rare to find a new species of tyrannosaur because there weren’t many roaming the earth millions of years ago.

"They were the apex predators of the eco system and the nature of the food chain, relative to plant eating dinosaurs, there just weren’t many of these apex predators," said Zelenitsky.

She says Voris’ keen eye recognized the new species and earned him the right to name it.

"The last one that was named was 50 years ago, and this is the first tyrannosaur species in Canada to be named by a student," said Zelenitsky.

Francois Therrien, curator of dinosaur paleoecology at the Royal Tyrrell Museum of Palaeontology, says the specimen was collected in 2010 and has sat in storage ever since. He was part of the team that went to the location where the fossil was found.

"So we went to the site and measured the stratigraphic section to describe the rock record where the specimen is from in order to determine the age of what that specimen was," said Therrien. "That’s how we discovered that the specimen was much older than all the previous dinosaurs from Alberta."

"It’s older than T-Rex but it seems like this was North America’s T-Rex at the time," said Voris. "It was a species that was distinct from T-Rex and it wasn’t until several million years later that T-Rex came to North America, probably from Asia, and invaded and replaced all the tyrannosaurs that we see in North America from that time range."

Thanatotheristes provides scientists with insights into the tyrannosaur family tree and shows that tyrannosaurs from the cretaceous of Alberta were more diverse than previously known.

"There’s very few places in the world where you can brag that you have five different species of tyrannosaurs," said Therrien. "Most places — like in the States — if you have one, two, maybe three tyrannosaurs you’re very lucky. Here in Alberta we already have five."