CALGARY -- A proposed building in Inglewood has some residents and business owners worried their neighbourhood's historic side could be in danger.

Calgary developer RNDSQR is hoping to build a 12-storey mixed-use building on the northwest corner of Ninth Avenue and 12th Street S.E.

It will replace a used car lot that currently occupies the area, and its design will incorporate the historic Canadian Imperial Bank of Commerce building next door.

But construction will require approval from city hall, as the build would more than double the area’s current height limit.

Residents argue it’s too tall for the city’s oldest community, which is currently made up of almost all brick buildings.

The issue has sparked a heated debate throughout the last year.

"The Heritage District will never be the same if we start approving these high-rise buildings," Phil Levson told CTV News.

Levson is the president of the Inglewood Community Association. Saturday, the group gathered with concerned residents and business owners to protest on the corner in question.

Balloons were strung from the street to illustrate just how tall the building would be. Levson says something of that height has no place on the road. 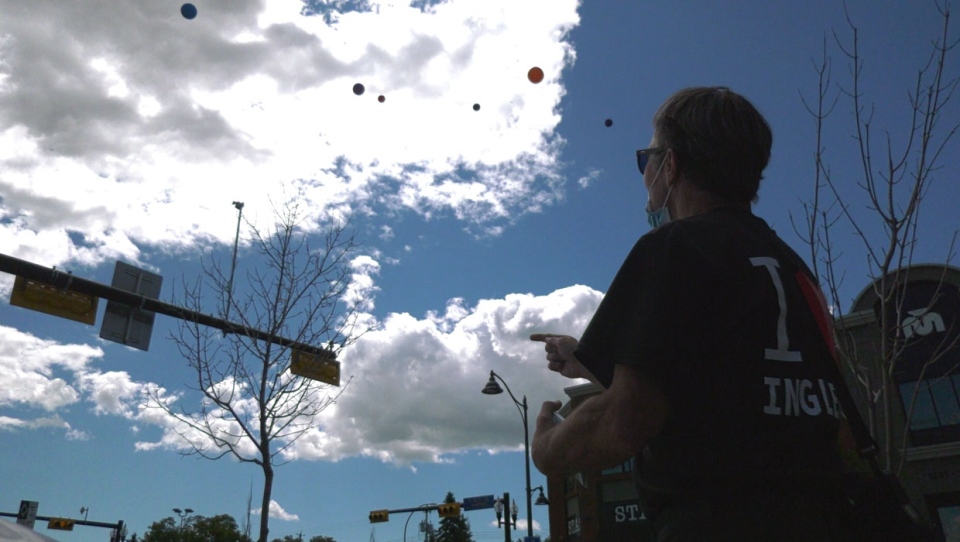 "We've got the charm, we've got the ambience," he said. "You can’t replace that. Once the heritage is gone, it’s gone forever."

The association says the RNDSQR build will stick out in all the wrong ways. Some nearby business owners agree.

Nick Clark, who owns Spot Power, says he bought into the area because of the atmosphere –

something be fears will be lost with more high-rises.

"There's nothing wrong with new development and increased density," Clark said. "But why not do it in conjunction with enhancing the area rather than trying to change it? Use some brick. It doesn’t have to be glass and steel to pretend we’re a building in downtown."

Two other buildings on Ninth Avenue S.E. have also caught the attention of the group.

One, on Eighth Street, will be 10 storeys high and has been tentatively approved. The other, near 11th Street, would be even taller than what RNDSQR is planning.

Clark says all three builds would be out of place in the community.

"You don't have to try to duplicate history," he said. "But what you do need to do is augment it."

On its website, the developer describes the potential build as "a catalyst for local creative culture," that would bring "new life to a cherished heritage building."

RNDSQR says the build would make "efficient use of the City’s infrastructure on an underutilized site."

The zoning changes required by RNDSQR will go in front of council on July 27.

"It is a big, serious, significant change for the community of Inglewood," area councillor Gian-Carlo Carra told CTV News. "It is a cultural heart of our city, and it's also an economic engine of our emergence into a new economy. We need to have places to do all of that."

The Inglewood Community Association has started an online petition asking for the proposal to be shot down.

As of Saturday afternoon, it had more than 23,000 signatures.