CALGARY -- The 2020 Youth Science Fair in Calgary takes place in April for students between grades five and 12.  But work on those projects has been well underway at schools all over the city., so much so that you could almost call this time of year 'science fair season'.

For example, Webber Academy hosted its school science fair Wednesday February 19, the culmination of months of work for  70 grade six students who have worked individually or in groups on 59 projects since October. ( It’s mandatory for them to participate).

Margo Kass worked on her own, on a project that focused on baking cookies.  She grew up in the US midwest and found her cookies weren’t rising like she expected.  She learned that it had to do with atmospheric pressure.

She put in a lot of time experimenting with different recipes to come up with the perfect cookie in Calgary.

“There are a whole bunch of things that are involved like flour and other ingredient amounts, I actually came up with really unexpected results,” said Kass.  “But now I know that I can actually use this cookie recipe -- I know that it’s good.”

Janet Summerscales teaches grade six, in addition to serving as the elementary science fair coordinator.  This year the school had 25 high school students mentor younger kids with their projects and the 20 steps they had to complete to get to science fair.

Summerscales was continually impressed with how much work all the students put in to their projects.

“They go over and above any expectations I could have," she said. "They’re just an incredibly inspiring group of students to work with.”

Emily Jiang, a grade 12 student who had a project in last year’s school science fair,  shared her experiences with the younger participants.

Grade seven to 12 science fair coordinator Bogusia Gierus said Webber Academy has a history of students winning at all levels of science fairs.

“It’s so awesome, every year at least one of our students gets chosen to go to the next level which is the Canada wide," said Gierus, "and we (also) had a good streak that we’ve been going to the internationals as well just in the last few years.”

Grade 11 student Cassandra Seal started looking into bone density last summer.  She says she could be a candidate for osteoporosis when she’s older.  Seal researched sports participation and bone health for her science fair project. 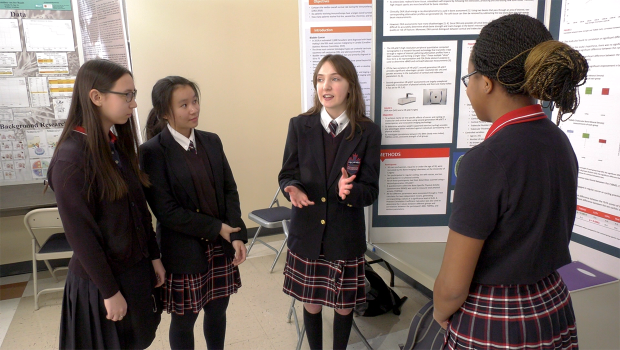 “I guess this is something that I’m interested in-- research -- when I’m older, so I want to try to experience a whole bunch of different fields in science to really decide what I like,” said Seal.

While it’s optional for the higher grade students to participate, organizers say events like this help students learn what they might like to pursue as a career or that research just isn’t for them.

Webber Academy will send 15 projects to the 2020 Youth Science Fair at the Olympic Oval.   Winners will go to a national event and if they continue to stand out, onto an international science fair.