While signs of spring are showing up in other parts of the country, Calgary and area is slow out of the gate, blanketed with more snow over the weekend.

Wet, heavy, snow started coming down on Saturday and, 12 hours later, it coated the roads.

Many people who are involved with spring cleaning – picking up all the grit and sand on deposited on the roads to improve traction and melt ice – were expecting to start work this weekend.

“We should be doing gravel removal and raking up leaves,” says Richard Edgar, who does landscaping and grounds keeping for the city.

Area residents are also expecting more, especially considering the time of year. “I expected to be enjoying better weather, but I guess you gotta take what comes in spring in Calgary,” says Jim McDougall.

City officials say they have crews working overtime to prepare for traffic on Monday morning.

According to them, they’ve had everything out on the roads.

Police are still cautioning drivers to stay alert and drive to conditions. They had about 40 crashes reported to them from midnight to noon on Sunday.

One such crash saw a sanding truck tip over along Shaganappi Trail, near Country Hills Boulevard N.W.

The driver was taken to hospital with minor injuries.

Investigators are working to learn what caused the truck to crash.

It wasn’t just drivers that needed to be careful during the spring storm.

A woman luckily escaped serious injury after she was hit by a piece of ice that fell from a building while she was walking on 24 Ave. S.W.

Calgary EMS found she was not seriously injured.

Calgary fire crews responded to the scene and closed a nearby LRT platform as a precaution.

In another part of the city, traffic is being delayed due to a water main break.

Work is expected to create long delays in the area. 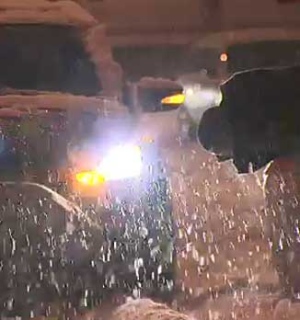 Browse our series of weather photos