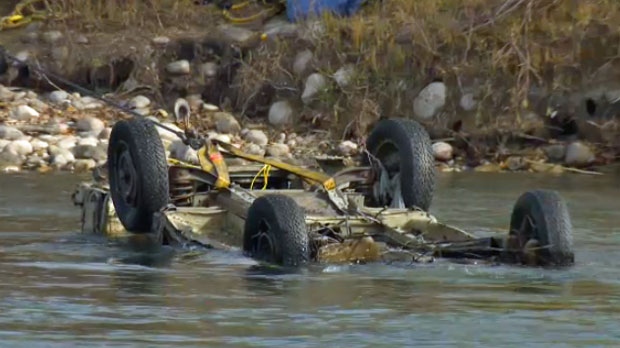 The truck was found by the fire department while on routine patrol of the river at the end of August.

Crews were finally able to pull a truck that was swept away in the floods out of the Bow River on Tuesday.

The pickup has been under water for several months and was discovered by fire crews at the end of August.

The truck did not pose a danger to public safety so crews decided to leave it until they could figure out a safe way to extricate it.

“We are currently in a restricted access period for working in the rivers so we have to get a biologist assessment and special approval from the provincial regulators to do the work. And so that’s why now, we've got all of that taken care of and we can actually now remove this truck here today,” said Andy Hughes from the City of Calgary.

A dive team was used to attach a winch to the truck so it could be pulled to shore.

“It’s quite a technical exercise because we are just downstream of the Harvie Passage there and the current in the river is a little bit higher, so that’s why we’ve had a dive crew and a safety crew here as well,” said Hughes,

Hughes says the truck will now be taken to the city’s impound lot.