A multi-vehicle Tuesday afternoon collision on Highway 9, between the communities of Chinook and Cereal, left three people dead and sent 12 to hospital.

On Thursday, RCMP confirmed the deceased were all from Saskatoon.

According to RCMP, 10 vehicles were involved, including three semi-truck units and seven passenger vehicles. One of the trucks was hauling fuel, which ignited following the impact, causing a number of vehicles to catch fire. A second semi was hauling butane.

Police say the collision area was consumed with flames.

An evacuation order was issued for the Hamlet of Chinook.

Residents in that community told CTV the explosions shook their homes.

"One explosion, then two explosions like that. Then I looked around and saw the smoke (and) I called 911," said Chinook resident Patricia Savoie.

Just down the street, Ladislas Drouin was sitting at his supper table when the crash occurred.

"It kind of sounded like someone just banging up against my building there," he said. "Like that, so then the next one, I get up, I goes outside and there's smoke galore coming like crazy!"

Shortly after, Drouin and Savoie were told by police that they needed to leave the community for their own safety.

An Evacuation Centre was opened at the Youngstown Community Hall, where everyone displaced by the emergency could stay.

RCMP confirmed three adults died at the crash site. The identities of the deceased have not been released.

The stretch of Highway 9 where the crash occurred is a construction zone. The speed limit drops from 100 to 50 kilometres per hour, and area residents tell CTV that road crews regularly stop vehicles for construction traffic.

The RCMP confirmed they are examining what role this may have played in the crash.

"When we do an invesigation, everything is taken into consideration," said RCMP corporal Jon Cormier, "and this area was under construction at the time of the accident."

Originally the RCMP expected the road to reopen by noon Wednesday, but venting the butane from the damaged tanker proved more difficult than first thought.

That process ended at 6 p.m., and large tow trucks, which had been brought in from northern Alberta, moved in to begin the final stages of clearing the road. 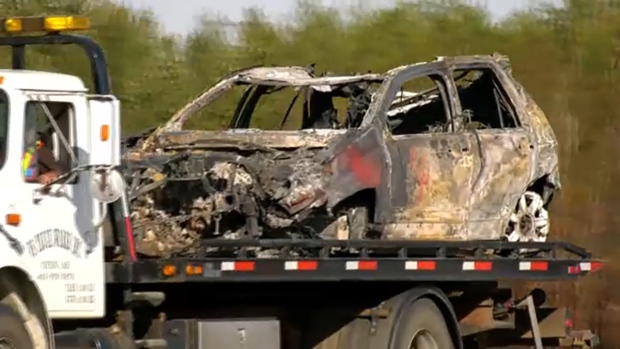 Highway 9 at Range Road 72 re-opened for travel at approximately 8 p.m. Wednesday, when all the work necessary to clean the highway and prepare it for vehicle use was completed.

Due to the nature of the crash scene, RCMP anticipate the investigation into the crash will take several weeks.