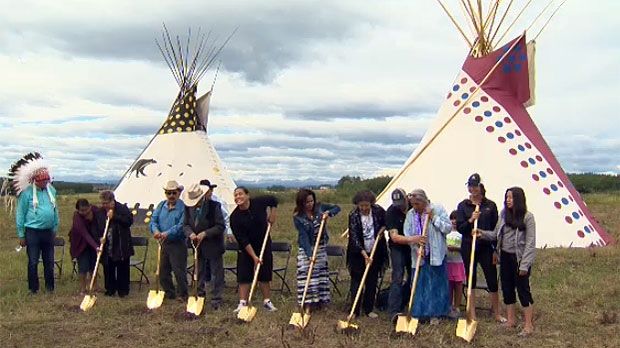 The new Sportsplex will be built on land that was owned by former chief Joseph Big Plume in the 1930s.

The Sarcee Seven Chiefs Sportsplex on the Tsuu T’ina Nation is being torn down to make room for the southwest ring road extension and a new facility is being planned to take its place.

The land for the ring road was officially transferred to the province at the end of May and the extension will run from east of 69 Street SW on Glenmore Trail/Highway 8 south to Macleod Trail/Highway 2A.

On Wednesday, officials and dignitaries gathered for the official sod-turning and the plan is to break ground on the new sports centre within the next few weeks.

“It’s the biggest project, next to the road, to date. It’s the hugest building that we’re building, in terms of giving back to the community, so it means a lot in terms of its sheer size and then the magnitude and the positive impact on the community,” said Kevin Littlelight, Public Relations for the Tsuu T’ina Nation.

The new complex will feature new rinks, seating for 5000 spectators and an array of additional sporting facilities that will benefit the members of the nation and Calgarians.

“We’ve had a great relationship for the last 40 to 30 years with our former arena, the Sarcee Seven Chiefs Sportsplex. It was utilized well by Calgarians and received well by the sports community and this is going to be just the same, but double,” said Littlelight.

The Sportsplex will be built in phases just south of the new ring road and will include a new community hall and several ice surfaces.

“So we have roughly about 18 months for completion on two hockey arenas as well as the community hall,” said Littlelight. “The Seven Chiefs is already closed down so we’re ready to go and ready to get busy and get back on the ice.”

The cost for the first two phases of the project is estimated to be about $48M and officials say the facility will have its own secondary road to allow for easy access.