CALGARY — A team of University of Calgary students have invented a process that could solve the ‘green seed problem,’ a downgrading factor in the oil seed production that costs Canadian farmers an average of $150 million a year.

The green seed problem develops when canola crops are subjected to an early frost, fixing the chlorophyll in the seed instead of allowing it to dissipate as the plant matures, because chlorophyll affects the quality the oil extracted from the seed.

“That causes the oil to spoil much faster. There's a lower smoke point, and it has a bitter taste,” said team lead Sara Far.

“There's a lot of problems associated with (chlorophyll).”

As a result, the presence of chlorophyll in a canola crop downgrades the value of the seed, knocking between 10 and 20 per cent off the sale price of a crop.

In November, the team took their innovations to the International Genetically Engineered Machine (iGEM) Foundation’s Giant Jamboree event in Boston where they claimed a silver medal, besting the perennial podium team from MIT.

While most canola researchers looking to solve the green seed problem have focused on modifying the genetics of the plant, the U of C team instead turned to the oil making process.

Currently, bleaching clays are used to extract chlorophyll, in a process that is both expensive and oil-wasting.

“We realized that the lab scale that our system can remove the same amount of chlorophyll as the industry standard right now, while maintaining higher levels of oil recovery, which is extremely valuable for the industry because they don't want to lose the product that they're producing” said Juan Alvarez, chemical engineering student and another of the team leads. 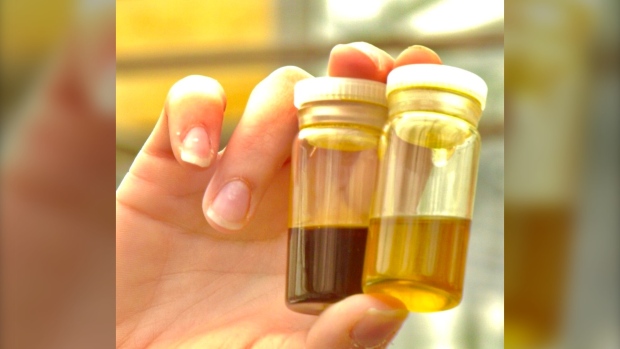 Once the chlorophyll is stripped from the oil, the students found it can be re-purposed into a fungicide which fights sclerotinia, a fungal infection that degrades canola plants.

“We think that we can actually build up a new market by introducing this new antifungal agent.” said Alvarez, adding it hasn't been explored previously.

While designing their chlorophyll removal process, the team also designed elegant solutions to several other nagging issues in canola production. They invented an automated grading system using artificial light, cameras and computer algorithms, to rate the quality of seed.

Presently, canola is still graded by having buyers simply eyeball the seeds and compare them to a set of coloured cards.

It’s a subjective process, with farmers reporting they get different grading results by taking the same sample to different buyers.

While many school projects end up on the shelf gathering dust, the U of C team is already moving to take their inventions off the lab bench and bring them to market by forming a biotech start-up.