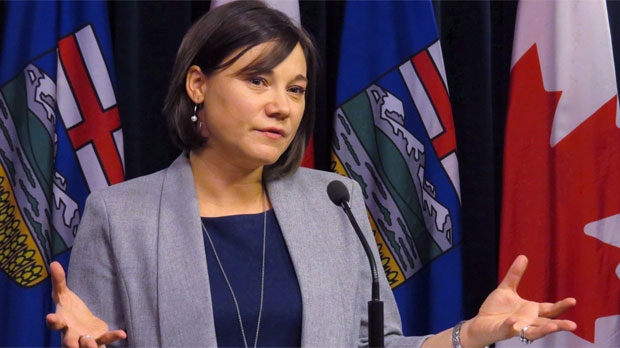 Lethbridge-West MLA Shannon Phillips put in a FOIP request on herself and Lethbridge police and was troubled by what that revealed. (File photo)

CALGARY -- Calling the records "shocking," Lethbridge-West MLA Shannon Phillips spoke publicly for the first time Monday about information she obtained through a request under the Freedom of Information and Protection of Privacy Act.

Suspicious that some members of the Lethbridge Police Service may have been monitoring her, Phillips put in a FOIP request on herself and Lethbridge police.

She then received a CD late in 2020 containing 9,308 pages, although almost all of them were blacked out, or partly blacked out.

Phillips confirmed the pages that were not censored show that in 2018, her name was searched eight times by six people — including five police officers and one civilian employee — with no investigative purpose given for any of those searches.

Alberta Opposition Leader Rachel Notley said at a press conference in Edmonton that the public "must be able to trust out police services to protect our safety."

Notley said the misuse of police power is unacceptable in a democratic society, adding Albertans are owed a thorough investigation by the Alberta Serious Incident Response Team (ASIRT) and a full accounting of what happened from the government.

“This is obviously a very troubling revelation,” said Notley, who added itis also disturbing from a personal level.

“I worry for my colleague.”

Notley says it was difficult to imagine living in a community where you can’t be sure you can count on support from the police when you need it.

Phillips says she wants her community to be safe, “and part of that is that citizens trust their law enforcement, and they don’t have that right now.”

In July 2020 two Lethbridge police officers were demoted for tracking Phillips actions when she was Alberta’s Environment Minister over the government’s plans for the Castle region.

But last month, the Alberta law enforcement review board called their disciplinary process, "tainted, flawed and grossly inadequate," while granting Phillips the right to appeal the discipline. That appeal will likely happen in September.

The information contained in this latest FOIP request is separate from the previous investigation.

Phillips said one of the records accessed by officers contained information of a very personal and highly sensitive nature that occurred before she was elected to office.

She said there was no reason provided for the search.

“LPS was looking around that record, and many, many, many of them, for no reason whatsoever.”

Phillips said she wants to make sure officers are held accountable, and believes police have a lot of work to do to repair public trust.

“I do not see evidence, frankly, that the Lethbridge Police Service understands how serious this is, and is willing to do the work to repair that public trust," she said.

In February, ASIRT was directed to investigate the circumstances surrounding the potential breaches of the LPS database.

Chief Shahin Medizadeh also ordered an investigation under the Police Service Regulation, but said findings would not be released until ASIRT had announced the findings of its investigation.

Notley said there need to be consequences but the processes need to be allowed to work.

In a statement, LPS said it is unable to provide comment on the matter as it is part of an ongoing investigation by ASIRT.