LETHBRIDGE — An eight-year-old purebred Black Angus cow has been sold at an Alberta auction this week for $140,000, a price more associated with a Tesla than a cow.

The animal, known only as 109z, was sold by the U2 Ranch during a two-day dispersal sale at Perlich Bros. Auction Market on Nove 11 and 12.

"There aren’t many like her," said U2 Ranch owner Darren Unger. "She’s unique."

While the pricey bovine doesn’t have a name, she had already made a name for herself among many cattle breeders.

"The one party bought her first son, and has progeny out of that bull and so they naturally had interest in that cow because they knew firsthand what her genetics have been doing on their place."

According to GM and auctioneer Bob Perlich, it was the highest price they’ve ever had anyone pay for a cow in his company's 52 years of auctioning cattle to the highest bidder.

The sale was promoted as “Dispersal of a Generation”. It drew buyers from across Canada, the United States and Mexico.

U2 Ranch is located in the Oldman River valley northeast of Coaldale. It’s a family-owned Red and Black Angus cattle breeding operation run by Darren and Joanne Unger, along with two of their children, Cole and Jordyn.

Unger said he sensed there would interest in the cow, but didn’t know that the level of interest would be record-setting.

“It was very exciting." 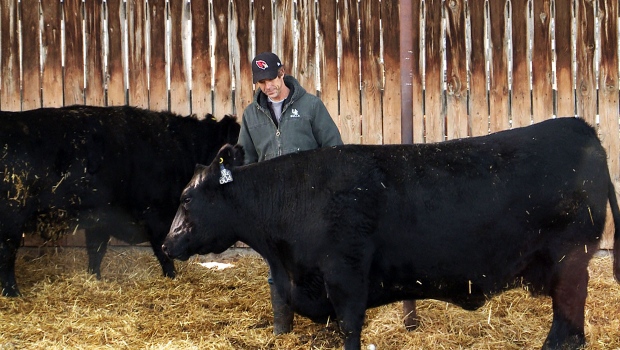 Two American cattle outfits, one from North Dakota and one from Wyoming, partnered to buy the cow. Unger said he spoke to them after the sale.

“They were pretty thrilled that they got her, and they were very thankful."

The cow is also carrying a calf.

Unger said after the calf has been born, the new owners will likely put her into an embryo transfer program to help advance their own herds.

Embryo transfer is a technology that involves collecting the embryos from the donor’s uterus and transfering them into synchronous recipients, who serve as surrogate mothers. It’s an option that can increase a cow’s reproductive efficiency, allowing her to have numerous calves per year.

According to Perlich Bros. several other cows sold for over $50,000.

While the Ungers sold off their herd of purebred females at the dispersal sale, they plan to continue at a slower pace, with their feedlot and commercial cattle business.

“We didn’t realize it would turn into what it did,” said Unger. “We sold 100 females to Mexico, which was a lot more than we thought.”

He said the sale was exciting, a bit emotional, and better than their expectations.

“We feel thankful that it went well, because your whole life’s work is kind of on the line."