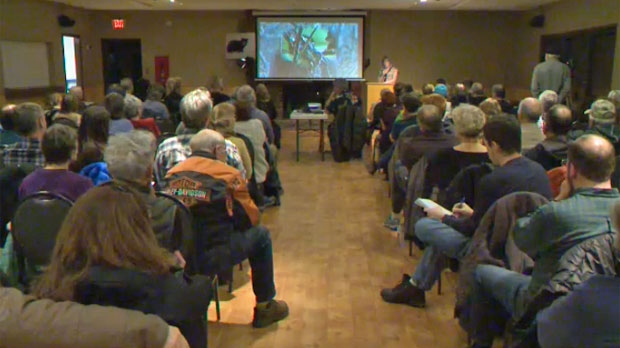 A packed house of approximately 150 people greeted the panelists at Friday night’s public forum at the Redwood Meadows Community Centre but noticeable in their absence at the discussion regarding an injured black bear were representatives of Alberta Environment.

“One of the big issues is Alberta Environment backing out of this panel discussion,”said Dr. David Swann, Liberal MLA for Calgary-Mountain View. “People genuinely want to hear why they’re eliminating or blocking the ability of these rehab societies, such as the Cochrane Ecological Institute, from taking on baby bears.”

“These folks have been rehabilitating animals for decades and it’s clear that the evidence being used, or brought forward, by Alberta Environment is either outdated or misinterpreted.”

The forum, hosted by the Russell’s Privacy Advocacy Group, addressed concerns surrounding the condition of an injured juvenile black bear that had spent months in a field along Highway 22. The province has repeatedly stated that intervening could do more harm than good while wildlife groups have pleaded for an opportunity to care for the bear that local children have named Russell.

The last sighting of the bear occurred on December 27, 2017 and its uncertain if Russell has died or gone into hibernation.

Swann says he was encouraged by the strong turnout at the forum including concerned citizens calling for the government to allow experts to assist Russell.

“It’s really hard to know why (the government)  stuck on this policy, which was instituted in 2010, to actually stop allowing some of these rehab societies from taking on these animals, young animals, many of them at-risk,” said Swann. “I think one would have to ask the minister and the senior administration in Alberta Environment why they have been unwilling to change a policy that seems outdated and not consistent with what the rest of the country is doing.”

“They’re not listening to either the public will or the scientific evidence on this particular issue.”

Swann says he has received a petition bearing thousands of signatures calling for a reevaluation of the policy surrounding the banning of the rehabilitation of Schedule A animals in Alberta and he will be presenting that petition to the Legislature.