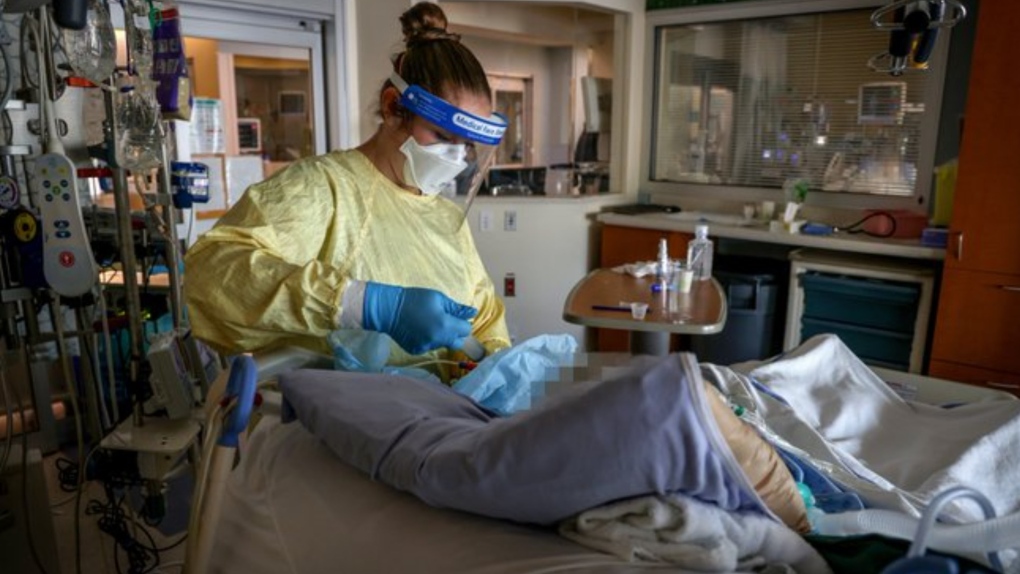 A registered nurse works with a COVID-19 patient on the Intensive Care Unit at Foothills Medical Centre on Sept. 10, 2021. (Alberta Health Services)
CALGARY -

The Alberta Union of Provincial Employees (AUPE) is demanding provincial funding be re-established to the health-care system and for planned cuts to be halted.

In a news release sent Wednesday, the AUPE says hospital resources are being stretched to their limits amid the fourth wave of the pandemic that immediate action needs to be taken as "now people are dying preventable deaths."

The request comes as Alberta returned to a state of public health emergency with numerous public health measures announced Wednesday.

There are now more patients in intensive care, 270, in Alberta than at any other point in the pandemic. With Alberta's ICUs at 88 per cent of surge capacity, calls have been made to other provinces requesting access to bed space or available staff to help.

The vice-president of Alberta's largest labour union says the basic essentials of health-care delivery are on drastically short supply.

"Now, AHS (Alberta Health Services) is on the verge of triaging. That shouldn’t be happening in our hospitals," said AUPE vice-president Bonnie Gostola.

Triage is when medical professionals assign the degree of urgency on patients and determine who takes priority for treatment.

Gostola is also calling for a complete overhaul of the medical system with emergency funding support and for the province to end plans to outsource another 11,000 positions within AHS.

According to the province this cost-saving initiative will span over a period of three years and will exclude nurses and frontline clinical staff. Laundry, housekeeping, food service and lab work positions are likely to end up being contracted out to a private employer.

In an emailed response, a spokesperson for the finance minister says that the province can't speak to the multiple health-care contracts in the midst of negotiations with AHS, but is taking the pandemic and current state of hospital capacity very seriously.

Final details of the contract with the United Nurses of Alberta are scheduled to go to mediation next week after a tentative deal was struck.

"We have a tremendous amount of respect for the province’s hard working health-care workers, who have been essential in caring for Albertans throughout the pandemic," said Kassandra Kitz, senior press secretary.

She adds the provinces hopes for deals to be reached soon to bring labour stability to Alberta's health-care system.

As well, the AUPE says the province's health budgets in 2019 and 2020 did not adequately bolster healthcare for the current situation.

However, the province's latest budget for health is $23 billion for 2021 which is the largest single-year health investment in Alberta's history, says Kitz.

Healthcare spending on the COVID-19 response is at $1.5 billion for this year on top of the health budget.

"We also recently announced up to $36 million in new funding to improve wages and create additional workforce capacity. This will allow more Albertans to receive care outside of hospitals and free up resources to treat COVID-19 patients during the fourth wave," said Kitz.

The Alberta Federation of Labour largely concurs with the AUPE that Alberta has been running a brittle system that can't handle shocks like its currently experiencing.

"(Alberta has)essentially been running a 'just-in-time' health-care system that runs very close to capacity even on normal days," said Gil McGowan, president of the organization.

He added, "the current crisis is a direct result of Kenney’s reckless and irresponsible Open for Summer plan, but it’s also a legacy of Klein’s cuts of the 90s and chronic underfunding ever since."

CTV News also reached out to the United Nurses of Alberta as well as the offices of the health minister, and is waiting to hear back.

Albertans need solutions because the pain is far from over," said Gostola. "The death toll grows. The Premier is coming in too little, too late today, but there’s still time to implement solutions, and we’re going to ensure he actually does right by frontline workers and all Albertans."