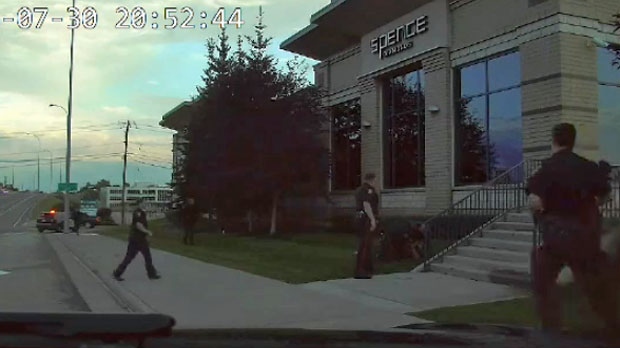 Video still of a recording of the arrest of Clayton Prince along Macleod Trail S.W on July 30, 2016 (Court exhibit)

CALGARY -- A Calgary police officer has been denied an appeal of his convictions for a violent arrest during a traffic stop in July 2016.

In a statement released Tuesday by the Alberta Court of Appeal, Othen's request was dismissed because he could not provide proof of an arguable legal error made by the previous Judge.

Othen had alleged the Judge failed to consider Section 25 of the Criminal Code, which allows law enforcement to use force during an arrest if the amount of force can be justified by the situation.

Othen's sentence of 90 days of incarceration, to be served on weekends, will now be carried out, as it was put on hold pending the ruling of this appeal.

During the traffic stop, the driver, Clayton Prince, fled his vehicle and hid, coming out when more officers arrived. Prince said he was paranoid due to driving without a licence, and had consumed cocaine and marijuana earlier in the evening.

Dash-cam footage showed Prince on the ground when Othen another officer jumped onto his back and dealt multiple blows to his head and torso. The footage then abruptly ended.

Judge Margret Keelaghan, who previously sentenced Othen, said that the dash-cam video's sudden ending during a pivotal point in the arrest was, "very concerning and troubling."

Another officer alleged during the trial that Othen dug a key into Prince's neck and appeared to twist it.

Two other officers were acquitted of similar charges. Othen remains suspended without pay.