"I am terrified, like, as if 2020 wasn't bad enough already," said Calgarian Amy Wiggett.

"You're just kind of thinking 2020 can't get any worse and then all of a sudden, murder hornets?"

Entomologists actually detest the B-grade horror moniker, but admit the giant flying insects can be terrifying.

"It isn't going out to murder things. It's going out to eat, just like us," said Calgary entomologist John Swann.

"Are we going to call ourselves murder primates because we eat other animals? No. The reality is they're horrifying for the average public.

"I wouldn't be too happy with them either if they made nest in my backyard, but they aren't murdering. They are hunting, just like evolution has driven them to be.”

Swann has studied the hornets in their natural environment — along the Pacific Rim in Asia. While he says they aren’t particularity aggressive toward humans, the fact they nest underground means it's possible to disturb one accidentally. That, he says could be painful and even deadly.

“At about 28 stings, you probably survive, 56 stings is sort of the threshold. Fifty to 60 stings, you're in serious danger," said Swann.

"And it's just like anything else. If you're allergic to the venom, you'll have anaphylaxis on one sting and die, potentially." 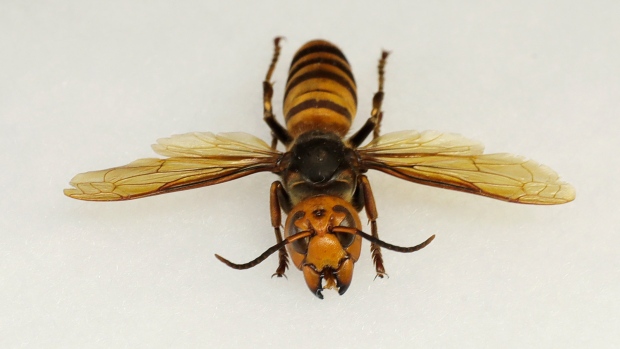 Unlike bees, hornets can sting repeatedly, meaning 50 to 60 stings could come from just a few of the insects, which communicate danger to one another by releasing pheromones to attract a swarm.

“So suddenly you have 100 of these things, the size of your index finger, ticked off at you and ready to nail you if you accidentally stepped on their burrow," said Swann.

“But that's the same is true of all the native species of vespas (wasps and hornets)."

He adds the danger of an attack from Asian giant hornets comes from their size,

“You're getting three to four times the potential dose that you'd get from a native species," he said.

While attacks on humans are rare, the Asian giant hornet can wreak havoc on bee colonies, with just a handful of the insects able to wipe out an entire beehive in short order.

“A dozen hornets can kill an entire colony (of honey bees) single-handed in an hour," said University of Calgary biologist Sam Robinson.

"They just sit outside the front of the colony and kill the worker bees as they come out. And then eventually the worker bees get fed up and then they abandon their hive."

Robinson says Asian honey bees have evolved a defensive strategy to fight the wasps, but the European honey bee, which is the dominant species used in North American honey production, has not.

“Wasps in general are quite infamous for stealing honey and food from bees. These ones are just particularly very good at it,” said Robinson.

“These are not new to science or anything like that. They are new to North America. But these have been in East Asia since we've started keeping bees as humans."

How they got here is a question entomologists are now pondering.

The first sighting was on Vancouver Island, near Nanaimo. A second colony was found in Washington State.

DNA tests say the two colonies are unrelated, meaning the wasps did not spread their territory, rather that it was two separate introductions of the insects.

“That's the $24,000 question," said Swann, referring to how the hornets made the trip from Asia.

"You won't introduce those as pets. You know, this isn't somebody having a pet get lost. So it's got to have come in somehow in packing or shipping of something, whether its plants with soil around it."

The B.C. Ministry of Agriculture describes Asian giant hornets as "large compared to other hornets, with noticeably large orange heads and black eyes."

Both Robinson and Swann say it is unlikely the Asian giant hornet will gain a foothold in the Canadian prairies, as they are native to temperate rainforest environments and would not survive winter, though Swann adds a caveat.

"As a biologist, I'll never say never," he said.