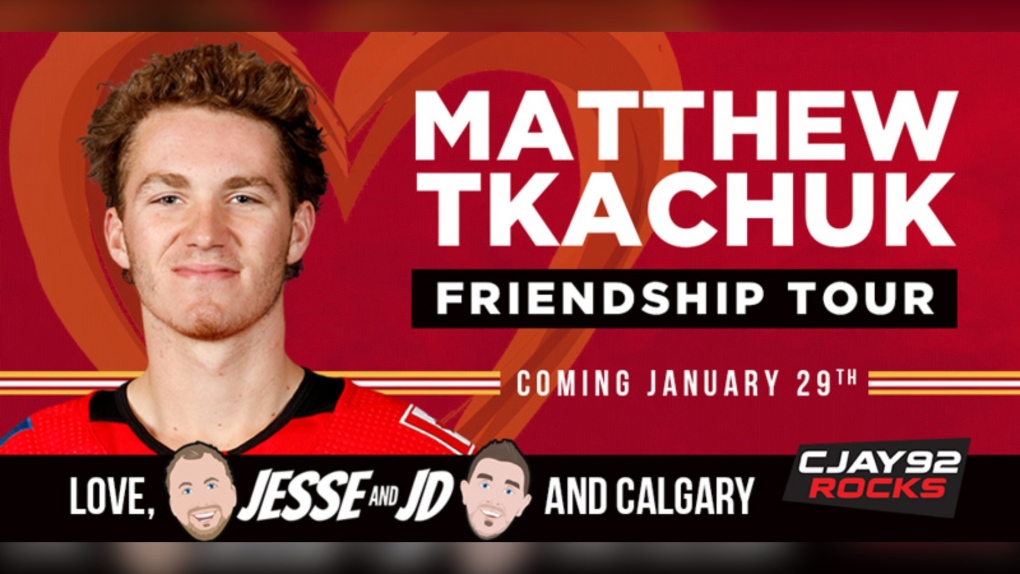 CALGARY -- There's been no love lost between the Flames and Oilers on the ice of late but a peace offering, of sorts, from Flames fans will soon appear in the provincial capital.

During Saturday night's Battle of Alberta at the Saddledome, Oilers forward Zack Kassian took exception with the actions of Flames forward Matthew Tkachuk and expressed his disappointment with his fists.

Kassian's decision landed him a two game suspension that will see him out of the Oilers lineup until Jan. 29 when the provincial foes will face off at Rogers Place in Edmonton.

After Saturday's game, Mohammad Elsaghir, a diehard Flames fan, felt Kassian and Oilers fans could use more Tkachuk in their lives and decided to start a GoFundMe campaign to raise $20,000 to erect billboards with the agitator's face "all around the city of Edmonton."

Elsaghir created the fundraiser for a laugh and was caught by surprise when the money started pouring in.

The hosts of CJAY 92's CJAY Mornings with Jesse & JD learned of Elsaghir's idea and arranged to have Bell Media — the company which owns the radio station, as well as several billboards in Edmonton and CTV News – bring the Tkachuk billboards to fruition.

On Friday morning, CJAY's Jesse Modz and JD Lewis revealed the "Matthew Tkachuk Friendship Tour" billboard design depicting a mugging Tkachuk in front of a drawing of a heart.

The billboards will begin to pop up in Edmonton in the coming days.

With the billboards secured, a decision was made to donate the funds from the GoFundMe campaign to the Snowy Strong for ALS charity.

As of Friday morning, more than $10,000 had been raised, and local philanthropist W. Brett Wilson has announced he will pledge an additional $10,000 to the cause.

Oilers fans responded to the original billboard idea by starting their own fundraiser benefiting Brown Bagging It, a charity that provides lunches to children in need. As of Thursday night, more than $37,000 had been raised through the initiative including a $10,000 donation from Wilson and a $2,500 donation from ATB.