Keeping a safe distance while enjoying the outdoors will be more strongly enforced in Calgary.

As of April 22, Calgary police have handed out nine tickets for people not respecting rules during the pandemic while bylaw officers have so far only given warnings, but expect that to change soon.

“It’s to protect you and others,” he said of the $1200 fines that could increase if offenders still don’t get the message.

The city will also restrict traffic on Crescent Road to deter visitors to the popular lookout over downtown Calgary.

“I had an occasion to go up on Crescent Road and their were pieces of that road that were completely inappropriate,” said Chief Sampson.

The McHugh Bluff stairs in that area will remain open for foot traffic but people must only travel up the stairs and go down the nearby ramp. 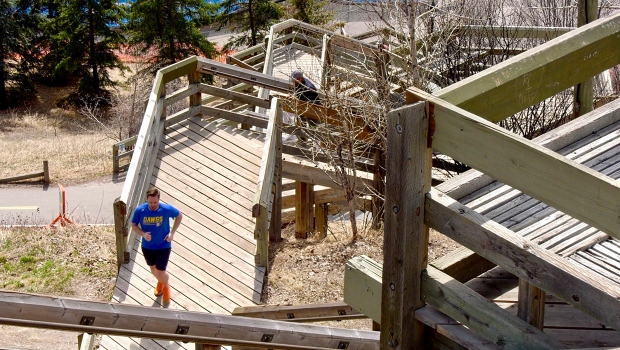 Between April 17 and 22, there were 241 bylaw officer patrols of the city, with officers speaking to more than 1800 people.

Getting fresh air and exercise while maintaining safe spacing is a balance most Calgarians have been achieving according to the mayor.

The mayor thanked those abiding by the rules to help keep everyone safe.

“These are small sacrifices, this is not what our grandparents were asked to do to save the world, but ultimately they are things that make a huge difference,” said Nenshi.

The city urged everyone to keep it up, saying the fight isn’t over yet.