The sign in front of the First Baptist Church Calgary on Fourth Street S.W. reads ‘Everyone Welcome,’ but a recent memo sent out to church members outlines future plans to deny membership for those identifying with the LGBTQ2S+ community.

According to the letter sent by Pastor Norm Derkson, the church is thankful for its long-time partnership with the Canadian Baptists of Western Canada (CBWC), but disagrees with other churches that are accepting of those with non-heterosexual lifestyles because it goes against their interpretation of scripture beliefs.

Derkson hopes the 160 member churches of the CBWC will follow suit with this motion.

"The CBWC has voted on a solid position with this matter, affirming and reaffirming a biblical view of marriage and sexuality, and yet these churches have been allowed to continue with practices that are contrary to our collectively stated convictions," the letter reads.

"While the vast majority of churches would not affirm the practice of these few, the number of churches choosing to welcome and affirm these members is growing and as a result the point of tension is on whether the denomination has any right to bring correction on individual churches, in light of our view on church autonomy."

Derksons’ letter goes on to states that First Baptist Calgary Church along with the High River Baptist Church have now advised the CBWC and its executive staff that a motion is needed. 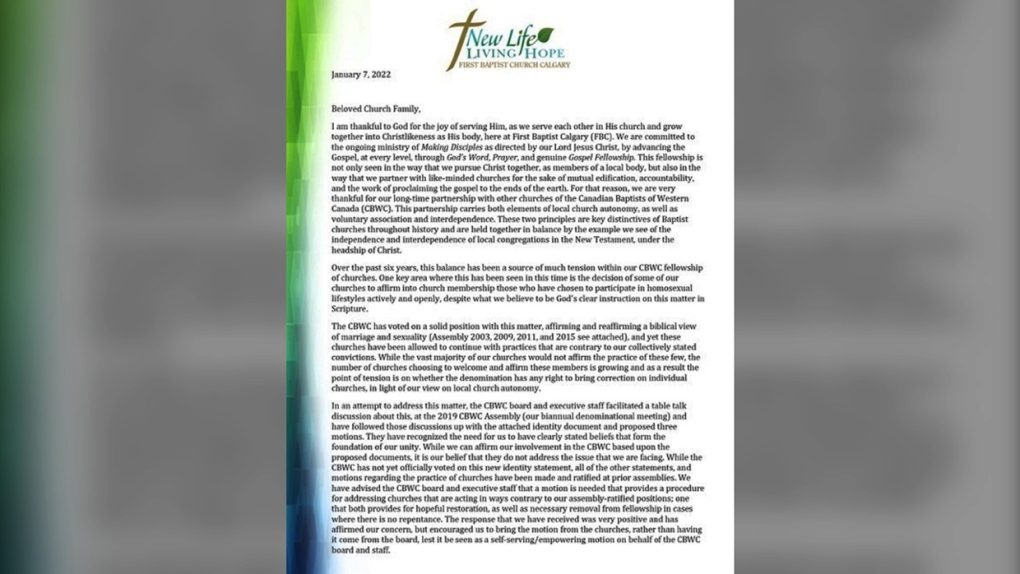 According to the letter sent by Pastor Norm Derkson, the church is thankful for its long-time partnership with the Canadian Baptists of Western Canada (CBWC), but disagrees with other churches that are accepting of those with non-heterosexual lifestyles because it goes against scripture beliefs.

He says the goal is "to provide a procedure for addressing churches 'acting in ways contrary to our assembly ratified positions; one that both provides for hopeful restoration, as well as necessary removal from fellowship in cases where there is no repentance'."

A member of the First Baptist Church Calgary who does not wish to be identified confirmed to CTV News that the church board and members of its congregation voted in favour of recommending the motion at a meeting on Jan. 30.

The motion will be put forward at the 2022 CBWB Assembly this coming May.

CTV News contacted Derkson, who did not respond to calls, texts or emails.

When reporter Mark Villani visited his office Thursday morning, Derkson declined to comment and said he was not welcome to return. 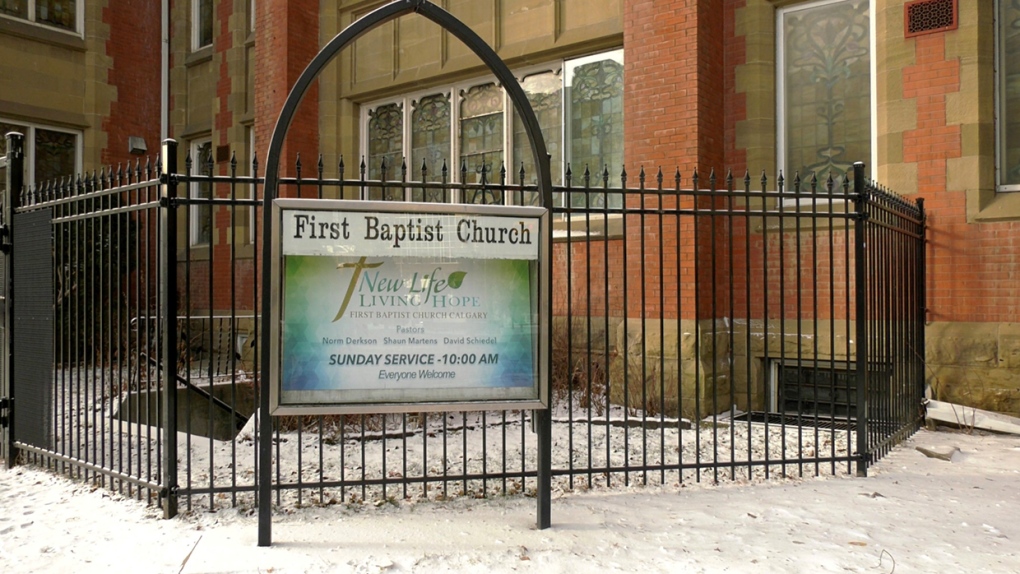 According to the letter sent by Pastor Norm Derkson, the church is thankful for its long-time partnership with the Canadian Baptists of Western Canada (CBWC), but disagrees with other churches that are accepting of those with non-heterosexual lifestyles because it goes against scripture beliefs.

Haley Wray grew up with two lesbian mothers in rural Alberta and says this letter from the First Baptist Church feels like a step back in time.

"It’s a tough thing, it marks exclusion, there’s no discussion, they’re not looking to learn or connect with anybody in the community, there’s judgement that’s been made and they’re taking the next step."

"It shocks me because I always hope that we're progressing or moving forward, and that we're continuing to realize the expansiveness the love of God and the divine have however we define it," Rocker said.

"Our job as citizens together and as people who don't want our friends and neighbors to be hurting, is to say that is not what I believe. I believe in something that's far more graceful and open and loving and that's what I believe Calgary and Canada is all about."

Rocker adds that anyone who has read the letter and has been affected by it should know that they have full supports available to them within the Calgary LGBTQ community.

"I would say that the folks who wrote that letter aren’t understanding how big and how amazing it is that we have all different kinds of people in the world," she said.

"That's a beautiful thing that we don't want to change and it has saved people's lives when we say that things like conversion therapy are not okay. It's actually criminal."

The line about ‘repentance’ in the First Baptist Church Calgary letter also struck a nerve with John Pentland who is lead pastor at Hillhurst United Church.

"Repent means that you’re changing your mind, changing your direction, and my understanding and love for the LGBTQ plus community is that it’s not about choice, it’s who they are."

Pentland noted he is reluctant to interfere in other denominations and allow them to have their own policies and understanding, but he still believes the church should be an inclusive place for all.

"Our church has not always had an affirming stance, there was time when we were a community of concern within the United Church, but through looking at scripture and reason and tradition and experience, we realized there are larger decision-making elements.

"We have always been a church that seeks to be opening and welcoming and ever-progressing towards a wider inclusion of all people."