CALGARY -- As president of Reggin Industries, Phil Alle watched as the pandemic began to eat away at his metal fabrication business. Instead, Alle and a group of Calgary innovators created a sterilization unit he says kills the COVID-19 virus in under one minute.

“I was worried about keeping my employees employed through the pandemic. And I wanted to find something we could manufacture to make a difference,” said Alle. “That was where we came up with the sterilization chambers, using UVC technology.”

Alle formed Teser Technologies to design and build a small but powerful U-V light sterilization unit.   Alle, as well as Reggin Industries' Brett Kostka, and John Fox, as well as Utechnology’s Kam Hammad, designed the units from the ground up.

The unit's primary purpose will be to sterilize PPE, in order to make them reusable.

“What we want to do is have it prepared if there's a second wave, and if the personal protective equipment (PPE) shortages keep going, ” said Allle “so that hospitals can change to repurposing  PPE by  cleaning it for reuse. We want to have a product ready there for them.”

While medical facilities like hospitals and dentists offices are the first target customers, Alle believes the market for sterilization of PPE is set to explode.

“There's other companies that aren't in the medical facilities, but right now want to keep their employees safe. They're having to give them N95  (masks). That's a massive cost and they're extremely hard to source.” said Alle “If you can reuse them for maybe the week, rather than just the day, you can automatically decrease your costs maybe down to one fifth, maybe one tenth of what you're seeing right now.” 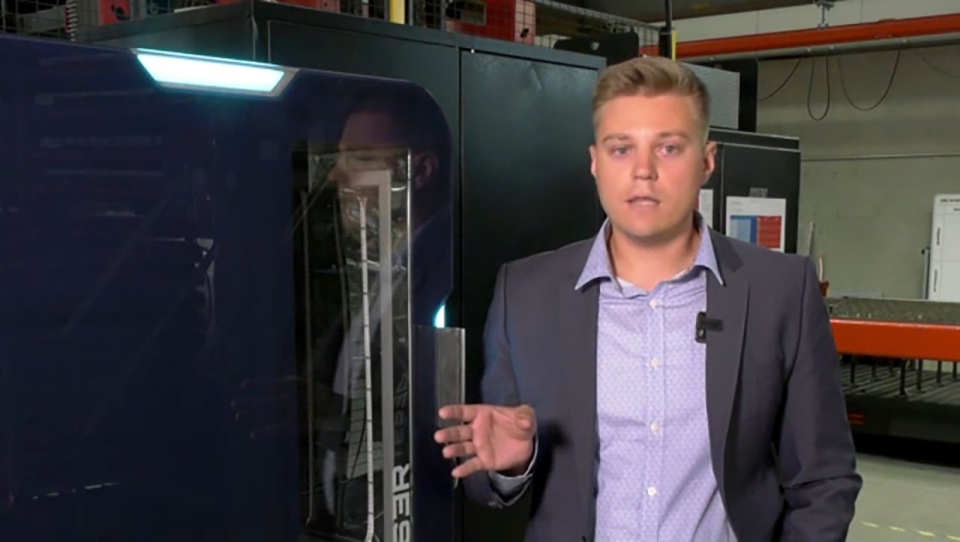 The Teser sterilization unit uses high powered UV-C light to kill pathogens on the surface of items placed inside it. The UV-C light, while invisible, is extremely powerful, and can kill the SARS-Cov2 virus - which causes COVID-19 - in just 45 seconds.  It can completely sterilize items placed inside it in just over three minutes.  Similar UV-C light is often used in large water treatment plants to sterilize drinking water, or in tertiary sewage treatment.  The company is working with Health Canada to have its device listed as a class 2 medical device.

"We are continuing to move forward on on multiple tests of different range of bacteria, which does mean that it would also kill influenza, as well.” said Alle

“As we as we push forward from Health Canada, there's specific bacteria that they've given us that they want to show that we were able to kill -  they're the harder ones to kill. Then they know the unit is going to work, because it's going to kill everything easier than that.”

Teser enlisted scientists from the University of Alberta to test their unit’s efficiency in killing a range of pathogens, including SARS-Cov2 (COVID).  The U of A lab has a level three laboratory, designed for researching infectious diseases.  It specializes in a type of pathogen called a “pos virus” which is a much hardier virus that the one that causes COVID-19.

“First of all we just tested out whether this unit in our hands could inactivate these pox viruses that we study," said University of Alberta microbiologist and immunologist Dr. David Evans. "They're also a very good surrogate virus or substitute because they're actually extremely tough. They're much harder than COVID viruses,"  he added.

“So (then) we could show that,  yeah, we could kill the vaccine, the Vaccinia (Pox virus) - it's really very simple.”

Alle believes there’s a need for small, fast sterilization units, but says they need to do more than simply kill viruses to be useful in repurposing PPE.

“A device that you could just sort of put it, have it on a counter in a busy nursing station and you come out from a patient's room, pop your mask in there for two minutes and you've sterilized the surface is, I think, probably a pretty good idea.” said Alle “People who wear these masks (throughout) 8-10 hour (work) days, can start to get skin rashes and when they get humid, and part of the problem there is of course, you've got microbes on staphylococcus bacteria on the mask itself, which would irritate your skin.”

Alle said the Teser sterilization unit has been shown to kill pathogenic bacteria, but it takes slightly longer  - between three and four minutes – to kill them than simply killing viruses, like the one responsible for the COVID-19 inspired pandemic.

He said the final paperwork is in the hands of Health Canada ,which must review the testing data before issuing an interim permit.  The first commercial units are expected to roll out of the factory by the end of July.