Calgary drivers reminded to slow down, move over when passing emergency vehicles 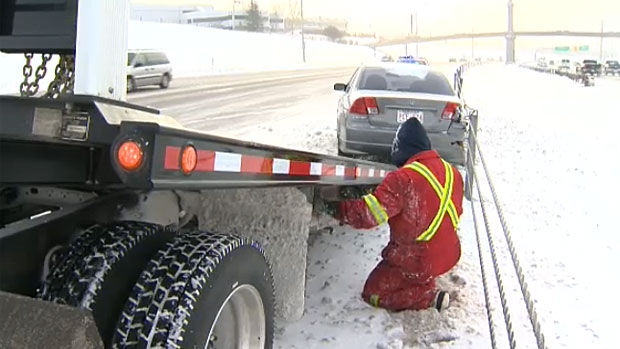 A Calgary tow truck company says roadside assistance is always a danger to its drivers, so that's why it wants all motorists to follow the rules. (File)

CALGARY -- A contingent of vehicles, made up of members of Calgary's emergency services, was parked at the side of Stoney Trail Thursday evening to raise awareness about road safety.

Tow truck drivers, first responders and road maintenance crews were set up at the side of Calgary's ring road in both directions near 114 Avenue S.E. to remind drivers about what they need to do when passing emergency crews.

The consequences for not doing so are deadly, officials say.

Approximately four years ago, tow truck driver Courtney Schafer died while on the job. He was assisting a driver on March 7, 2017, when he was struck by a vehicle near Esterhazy, Sask.

Calgary tow companies say their roadside work is the "most dangerous aspect" of their job.

"When you are in trouble on the road, we will be there to help. Give us room to work and we will have the issue resolved as quickly and safely as possible," said Jeff Hribnak, operations manager for City Wide Towing, in a statement.

According to the Traffic Act, drivers must always slow down to 60 km/h or the posted speed, whichever is lower, when passing emergency vehicles or tow trucks in the lane immediately beside where crews are working.

Failure to following the rules isn't just dangerous for first responders and tow truck drivers. It can also result in doubled fines for speeding for any drivers who are caught.

"Vehicles are one of the leading causes of fatalities and serious injuries to police officers. Tow truck drivers and emergency workers deserve safe working conditions while we do our duty, and ensure you have the help you need when you need it," said Acting Sgt. Andrew Parkins with the Calgary Police Service. "As a driver, it is your duty to ensure the safety of those around you while on the road. Slow down, move over, watch out for us and each other."

John Petropoulos was a Calgary police officer who was fatally injured while investigating a break-and-enter call on Sept. 29, 2000. The 32-year-old sustained severe brain injuries when he stepped onto a false ceiling, which gave way from under him, causing him to fall nearly three metres.

"We need drivers to slow down and give first responders room to work because we want everyone to make it home safely to their families," said Cliff O'Brien, chair of the fund in a release.

"The John Petropoulos Memorial Fund exists because we know all too well what it is like when a loved one never comes home again … as the result of an injury that could have easily been prevented."

The awareness event took place between 7 and 8 p.m. near Stoney Trail and 114 Avenue S.E.

Between 7 p.m. and 8 p.m. this evening, a contingent of emergency services vehicles will be parked in both directions alongside Stoney Trail and 114 Avenue S.E., as a reminder to drivers to slow down and move over. #yychttps://t.co/GuPbBBetYx