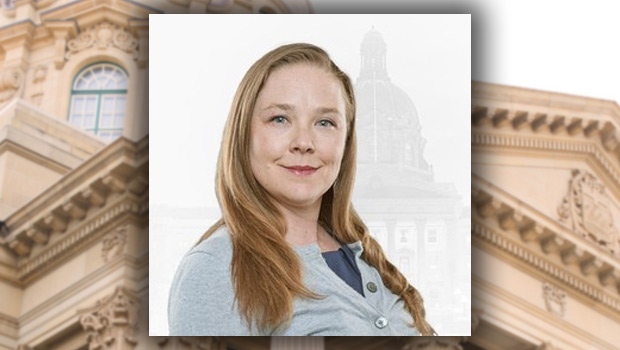 Calgary-East MLA Robyn Luff is seen in a photo from the Alberta NDP website. Supplied.

Robyn Luff, the Member of the Legislative Assembly for Calgary-East, has announced that she will refuse to sit in the legislature for the foreseeable future as she protests alleged bullying at the hands of NDP leadership.

Luff’s absence from the legislature began on Monday, October 29 and she announced her rationale on Monday, November 5 in an open letter to all Albertans (note: Luff's letter appears in its entirety at the conclusion of this story).

“Until a resolution has been presented, I will be refusing to sit in the legislature in protest of a culture of fear and intimidation that leads to MLA’s being unable to properly represent their constituents in the legislature,” explained Luff in her letter. “I have felt bullied by the NDP leadership for over 3 and a half years and it must stop.”

In her letter, Luff alleges all NDP MLAs are forced, at the direction of party leaders, to vote along party lines, questions from private members are written and provided by ministries,  and statements and comments at committee are highly scripted and agreed to ahead of time.

“I have several suggestions that I hope the Premier will consider in the legislature and start the conversation as an important public discussion and until she does I will be protesting,” continued Luff in her letter. “I cannot for my own health continue to be intimidated. I am passionate about having the people of Alberta be properly represented, and empowering those meant to represent them to their utmost capabilities.”

Brian Mason, Alberta's Minister of Transportation and Government House Leader, says he disgrees with Luff's assessment and claims all members of the NDP government do have an opportunity to speak their mind.

“I do know that our members have the opportunity to speak their minds and, when they do raise concerns, I know that the caucus and people in the Premier’s office sit down and talk with them and are willing to try and find accommodations," said Mason. "Unfortunately, she didn’t let that take its course and the offer that there be further opportunities to discuss a resolution to her concern was cut short by her decision.”

“I don’t think it’s fair to her constituents to just say ‘I’m not happy with how things work so I’m not going to show up to work’. I think she has a duty to be in the house and represent her constituents.”

Mason says the 54 NDP members who were elected into government in 2015 included only four representatives who had previously served in the legislature. "You had a lot of new people who were new to the parliamentary system. Some of them had more experience and some of them had less experience, so you have to adjust to the norms of parliamentary life and that involves having conversations with your colleagues, speaking up and so on. You support the direction forward once that’s been determined.”

Luff was elected to represent Calgary-East in 2015.