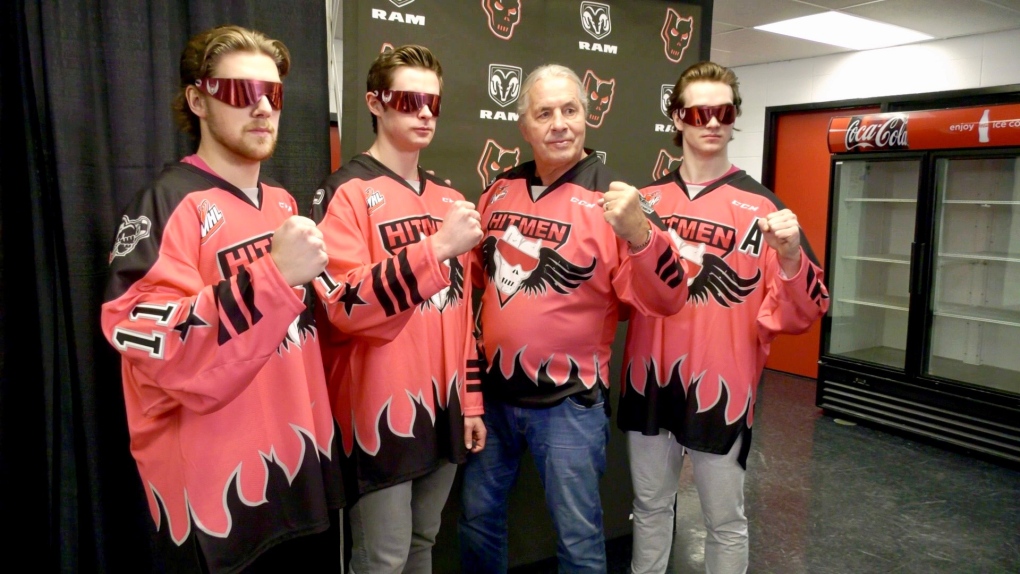 The Calgary Hitmen unveiled the jersey for the second annual Bret 'Hitman' Hart game in support of the Calgary Prostate Cancer Centre.

Hosted in association with the Prostate Cancer Centre of Calgary, the Hitmen will square off with arch-rivals the Edmonton Oil Kings on March 5, followed by five post-game matches featuring the Prairie Wrestling Association.

Game-worn jerseys will also be auctioned off after the event, with proceeds going to the Prostate Cancer Centre of Calgary.

Diagnosed with prostate cancer in 2016, Hart — a member of the legendary Hart professional wrestling family along with being inducted into the WWE Hall of Fame — was able to overcome his illness in large part due to early detection and treatment.

Unfortunately, Hart saw other members of his family fall victim to the disease.

"My older brother Smith was diagnosed with prostate cancer around the same time as I was," he said. "He never got tested and it was too late for him, it spread through his body and we ultimately lost him. It's really important for me to be a part of getting that message out -- it's important for men over 40 to get checked, and get checked regularly."

Linda MacNaughton with the prostate centre says men can't brush aside the need to be tested.

"It's important for men everywhere to realize they need to take time out of their busy days, stop being that fighter and warrior, and just go to their doctor to get a basic blood test," said MacNaughton.

"That's our message -- get checked. We want you around the next 20 years."

Known as a PSA, or prostate-specific antigen test, protein levels can be checked through a simple blood test administered at AHS labs. The test usually requires a requisition from a family doctor.

The second annual Bret Hart Game is scheduled for Saturday, March 5 at 2 p.m. More information can be found online.