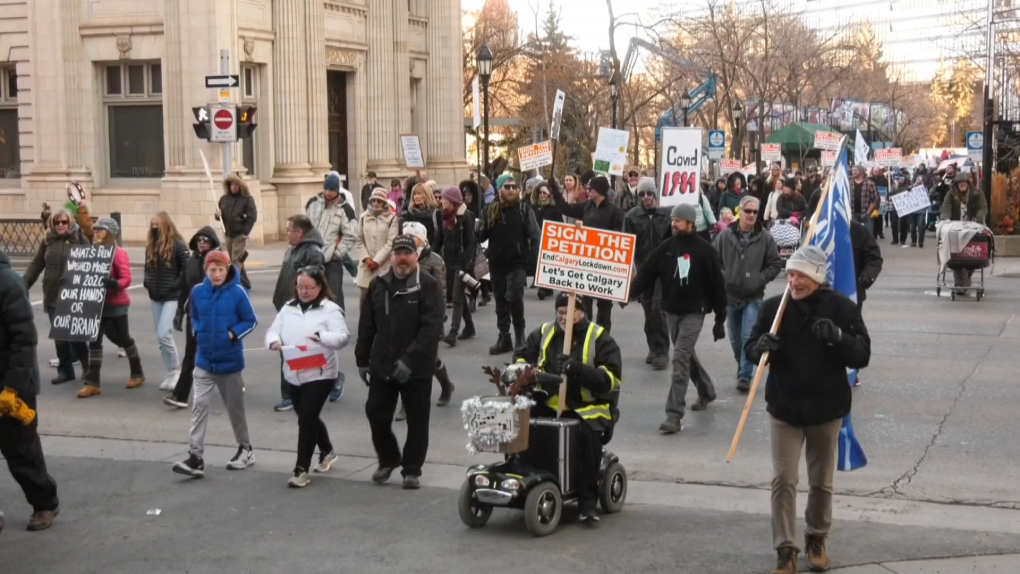 Ryan Audette, Artur Pawlowski and David Pawlowski were formally charged because of their participation in an anti-mask rally on Nov. 28 and 29, 2020. (File)

CALGARY -- A legal defence group says it is stepping in to represent one of the organizers of an anti-mask rally who was ticketed and fined $1,250 for not abiding by Calgary's and Alberta's COVID-19 rules.

The Justice Centre for Constitutional Freedoms (JCCF) announced Saturday it was representing Ryan Audette, one of the three men who have been formally ticketed for their participation in an anti-mask rally that took place last weekend.

Audette was ticketed for violating the Public Health Act's restriction against outdoor gatherings of more than 10 people, which carries a $1,200 fine, and not wearing a mask in public, which is in violation of the City of Calgary's face coverings bylaw.

In a release, the JCCF claims the COVID-19 pandemic has not rendered the rule of law or the Constitution null and void.

"Even during a declared public health emergency, the Charter continues to protect the right of people to peacefully gather in public places and demonstrate their opposition to the loss of their civil liberties and oppressive government policies," said Justice Centre lawyer James Kitchen in a statement.

Last week, the Calgary Police Service ticketed three men and said it was searching for three more individuals who had violated both the Public Health Act and the city's mask bylaw.

There are no details on if Artur Pawlowski or David Pawlowski, the two other men identified by CPS, are pursuing a legal fight over their own fines.

Audette's hearing is scheduled for Dec. 17 at the Calgary court centre.