CALGARY -- After four years of meticulous work, the $34.1-million restoration of Calgary's Old City Hall finished on time and on budget and was unveiled Tuesday.

Of the 15,522 original sandstones used to complete the building in 1911, nearly all of them — 15,142 in total — were treated with a combination of cleaning, structural repair, fortification or outright replacement.

“This building is one of Calgary’s few mainstays,” said Chris Arthurs, acting deputy city manager. “It still represents, and continues to represent, democracy, stability and hope.”

The majority of the original sandstones for the structure came from quarries in Calgary but the restoration team turned to Ohio for the hardest and most dense sandstone used to replace stones below, and at, ground level.

Stones at the top of the building that are able to withstand the most challenging weather conditions are from Poland, and quarries in Spain provided replacement stones for everywhere else.

“The stone we chose is as good a color match as we could obtain,” said Darrel Bell, acting director of facility management.

“I would say in a year or two you won’t notice a difference, in fact, if you’re over on the other side of Mcleod Trail it’s really hard to see the new stones from the old. There is a difference in the tone but they will age very quickly, I would say a couple years.”

Mayor Naheed Nenshi says this day to officially celebrate the opening of Old City Hall was chosen for a reason.

“On Sept. 15, 1908 the corner stone was laid on historic city hall, the ceremonial tradition that marked the start of construction,” said Nenshi.

“The mayor at that time, Arthur Cameron, said that he was confident that the building would see Calgary through the next 50 years.” 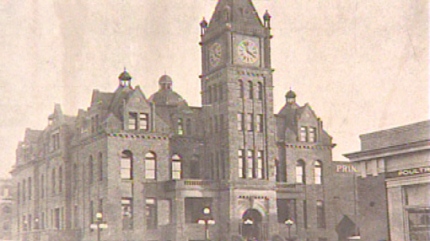 The hope is that this restoration work will last at least another century because workers took great care to divert rainwater away from the sandstone.

“One of the most important measures we took to protect the building for future generations is mostly hidden from view,” said Bell.

“We installed a rainwater management system which is housed inside the building and connected to a weeping tile which is actually connected to the storm drains out on McLeod trial.”

Along with masons fixing the sandstone, carpenters replaced the roof and restored the original windows. The last piece of the puzzle needing work is the actual clock.

The tower it’s housed in saw steel added and tied to the main building, but the actual clock is a few minutes slow. That’s because the pandemic has kept specialists in the U.S. from coming to Calgary to work on it.

"So we have been virtually teleconferencing with a clock maker to build it ourselves in the tower,” said Bell. “Right now we have a slight misalignment of two gear wheels and that’s what we’re trying to fix and then it will be fine, it’s almost there, we’re almost there.”