Most small businesses in Calgary will see a 10 per cent tax cut this year instead of the several hundred per cent increase many were facing.

The reversal comes after an emergency debate at Calgary city council where councillors unanimously voted to pull a total of $70.9 million from the budget savings account and the fiscal stability reserve and slash its budget for the rest of the year by $60 million.

City managers told councillors the cuts can be found but they will affect front line services in every department from planning to policing.

Franco Terrazzano of the Canadian Taxpayers Federation says the city needs to act more like businesses when it comes to trimming costs and that tough decisions do have to be made.

Several business owners sat through Monday’s council meeting and, while they like the fact their taxes will drop this year, they still worry about future increases.

"I’m happy that we got to that, it's really nice to see that 15 of them were on the same page," said Kelly Doody, owner of The Social School. “But at the same time. to be frank, that’s not really helpful for businesses that for the last three or four years have seen 50 per cent, 75 per cent, 200 per cent increases in their taxes. That has to be righted."

Taxes are due June 28, which doesn’t give the city much time to roll out the latest cuts to business owners, some of whom have already paid this year's taxes.

“We have a system in place that will ensure that if you've paid taxes and you were able to receive a rebate, you'll get a cheque in the mail,” said Ward 8 councillor Evan Woolley. “If you haven’t (paid) that will be addressed in terms of a rebate. We are figuring it all out.  We will be moving very, very quickly here to get this money out the door.”

Businesses who don’t actually own their property will have to count on their landlords passing on these latest cuts.  That's something many business owners say hasn’t happened in the past.

Monday's emergency meeting was held against the backdrop of hundreds of small business owners rallying outside city hall demanding  changes to their taxes.  Some even called for the mayor’s resignation over the huge taxes hikes they were facing.

Jill Belland is co-owner of Barre Belle and she, along with Doody, organized the rally. Belland says for many businesses reducing the tax burden is a matter of survival. “ People have their livelihoods, their entire life savings put into these businesses. They will close down because they just won’t be able to survive these costs.”

After the decision in council, Doody said business owners will continue to push for tax reform both at the civic and provincial level, noting it would require provincial  changes to allow the city to move away from its current market value assessment process .

"I don’t think any of us assume that the fight is over. That would be really naive” 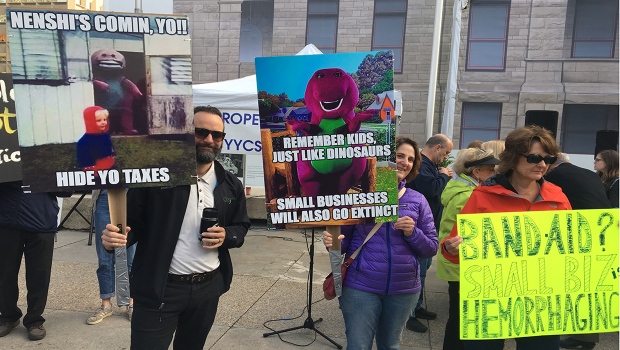