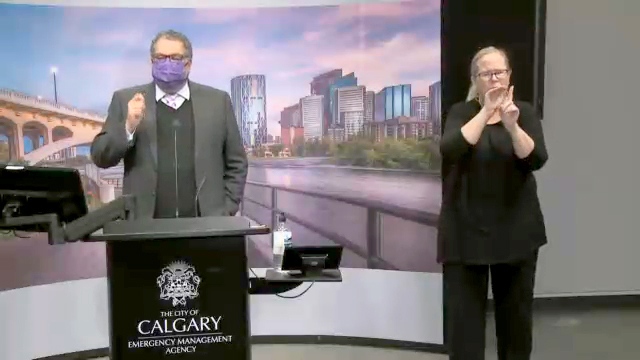 The city declared a state of local emergency on Wednesday.

CALGARY -- A state of local emergency (SOLE) has been declared by the City of Calgary, Mayor Naheed Nenshi announced Wednesday.

The move, which came into effect at 1:31 p.m., allows the city to better respond to the COVID-19 pandemic, especially around procuring resources, said Nenshi.

"It allows us the ability to supplement and the ability to work with the province to make sure that these issues are met, and for citizens, as of today it doesn't really mean anything," he said.

"We're not anticipating any further orders or instructions or restrictions on how you live your life beyond what we're talking about and what the province announced (Tuesday)."

Premier Jason Kenney announced new restrictions and declared a state of public health emergency, aimed at reducing the spread of the novel coronavirus.

Under the province’s new rules, indoor gatherings are banned and outdoor gatherings are capped at 10 people. Retail businesses are allowed to continue operating, but capacity is reduced to 25 per cent of occupancy. Restaurants also remain open, but diners can only sit with those in their household cohort. Those who live alone can sit with up to two other people designated as ‘close contacts’.

Weddings and funerals can happen, but attendance is limited to 10 people and receptions are not allowed.

The new provincial measures will be reviewed on Dec. 15.

Nenshi said the SOLE was enacted because the city is in a state of emergency.

"Despite all the good work we've been doing together, we've lost 186 of our friends and neighbours. Our hospitals are quickly reaching capacity and the risk to our families, our friends, our neighbours, ourselves, has never been higher than it is at this point."

Alberta Chief Medical Officer of Health Dr. Deena Hinshaw announced 1,265 new cases on Wednesday. The province has also reached a sad milestone, as there have now been 500 deaths associated to the disease.

"The province is headed down a path to drive the COVID numbers down and our job is to make that path as smooth as possible for our citizens, our communities, the businesses in our communities and in fact, all of Alberta," he said.

"We need to figure out how to make them work in a local context."

"I know how difficult these restrictions are, and we all want this to be over," he said.

"But please, follow the health guidance so that we can slow the spread over the holidays. I really feel this needs to be done quite urgently ... We need to collectively be all in to help drive this down. Please, I ask you to commit to the spirit of these new health measures, don't look for loopholes, commit to the health measures, lessen the contacts you make with others, take precautions, support our local businesses."

The city last called a state of local emergency in response to the COVID-19 pandemic in March, which lasted until June.

As of today at 1:31 pm, The City of Calgary has entered a State of Local Emergency.

We’re doing this so we’re ready and able to take action where needed to protect the safety of Calgarians. L

Now, what matters is kindness. It’s how we’ll get through this, stronger, together. pic.twitter.com/3PJZ18di6H