City on road to flood recovery

The cleanup continues in flooded out Calgary communities as the city moves from a relief to recovery operation.

In the northwest community of Bowness, heavy equipment is still scraping mud off sidewalks and roadways.

An army of volunteers has been mucking out basements and helping people get their lives back on track.

“I never want to fill my house up again as I had before and we're home. If it takes four to six months, that's ok, we'd like the furnaces back before winter but that's the only real important thing,” said Luise Kinsman.

“It's still important, absolutely, to be volunteering, there will still be areas that need volunteers, and even after we get the flood cleaned up there will be the rebuilding that comes as well right?” said Elaine Reykdal.

In Sunnyside the situation is the same and the Red Cross is going door to door making sure everyone is alright after a second round of flooding on Friday evening.

“One of the most important goals of the Red Cross is to make sure that no one is left behind, so we're literally going to knock on every door and make sure everyone is accounted for in Sunnyside,” said Kelly Turner.

In Mission, demolition companies are working on the larger projects and after weeks of slogging out mud and debris, the workers say they're proud of what they're doing.

The mayor says the city is transitioning from flood relief to recovery but that we still have a long way to go before things return to normal.

“Now we’re really focused on the cornerstones of recovery and those are, people, infrastructure, services and my favourite, money,” said Mayor Nenshi.

Nenshi says they have created a team dedicated to flood recovery to work in those four areas.

Gord Stewart from the city’s transportation department will be the new Director of Recovery and will manage the project.

“We have to get our city organization up and operating so that we can help the people in the community. We also have to address those community needs as we’re doing that,” said Stewart.

Stewart says it will be a long road to recovery but crews are moving as quickly as they can.

“It will take time to replace things like bridges. We can’t do that in weeks but we certainly don’t intend this to be a marathon either, we’re looking at a few years,” said Stewart.

Stewart expects to be in the role for the next four to twelve months.

The mayor says he is expecting some money from federal and provincial coffers but that the city will be on the hook for some of the repairs.

“We know that there will be costs that will not be covered or cannot be covered by provincial funding, whether those are deductibles or costs for infrastructure revitalization that they don’t normally cover so its, it will be very foolish to assume that the city will get out of this without paying a penny,” said Mayor Nenshi.

The Mayor says that the rivers are still running very high and are at or near the peak levels of 2005 especially in the Bow River. 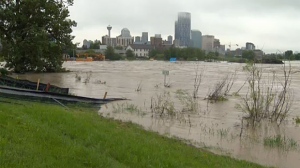