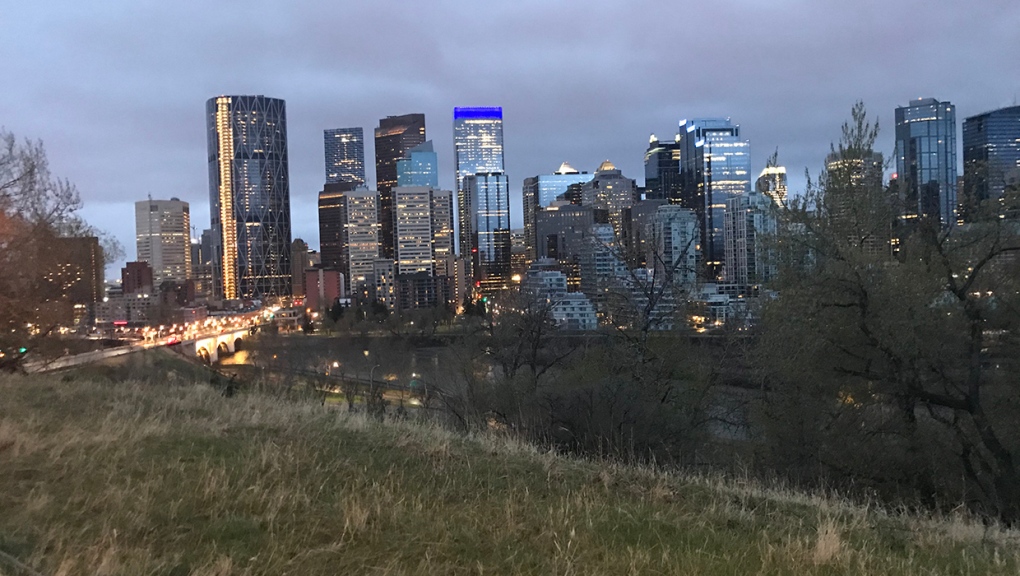 Between 2014 and 2019, Calgary saw the departure of nine head offices and 3,600 head office jobs, according to Statistics Canada. (File)

CALGARY -- For the veteran Calgary oilman whose name adorns the downtown Gray Family Eau Claire YMCA, the recent closing of the facility due to falling membership is the “canary in the coal mine” for the Calgary economy.

“The Y has been my second home. It's like I lost my closest friend,” said Jim Gray, 87, in an interview. He co-founded oil and gas pioneer Canadian Hunter Exploration in 1973 and remains a well-known business, philanthropy and healthy living advocate in Calgary.

“It's kind of like the canary in the coal mine. It's the wake-up call. There's all kinds of things that are shutting down and aren't going to start up (again) because we have to reposition our city.”

“(Head offices are) the rock in the pond, it ripples out,” said Rob Roach, deputy chief economist at ATB Financial.

An ATB analysis showed there were 9,500 fewer active businesses with at least one employee other than the owner in Alberta in January 2020 than there were in January 2015, a drop of 8.2 per cent, and the largest percentage drop was in oil and gas, down 24.8 per cent or more than 1,100 businesses.

According to TMX Group, operator of the Toronto Stock Exchange, the number of listed oil and gas issuers with Canadian headquarters fell to 132 at the end of 2020 from 286 at the end of 2015, with the biggest drop on the venture exchange, from 199 to 77.

For economy watchers in Calgary, 2015 marked the start of a long downturn as benchmark oil prices that averaged US$93.17 per barrel in 2014 dropped to US$48.66 in 2015 and stayed near there before slipping even further to US$39.16 amid pandemic lockdowns last year.

“It is to a degree worrisome but not unexpected that head office employment decreased in Calgary in that 2014 to 2019 period,” said Adam Legge, president of the Business Council of Alberta and former CEO of the Calgary Chamber of Commerce.

He said head offices are important because they initiate big decisions, they tend to “root” the company in the community and supporting companies tend to cluster nearby.

Despite Calgary's losses, it still has more head offices per capita than any other city in Canada, Legge pointed out.

The downturn has been felt most keenly in downtown Calgary, where real estate firm CBRE pegged the office vacancy rate at a record high 29.5 per cent at the end of 2020.

Some office lease rates have dropped by half since 2014, said Scott Hutcheson, executive chair of Aspen Properties, which owns and manages 11 buildings in downtown Calgary - including the iconic Calgary Tower. And sublet space can be had for even cheaper rates.

“I can tell you it's not the bottom yet. We're seeing lots of indecisiveness with tenants,” he said, adding Calgary's recovery likely won't start until after COVID-19 vaccines are readily available later this year.

Technology companies have been touted as an area of growth for Calgary but the founder of one of the city's most successful tech firms, Benevity Inc., said it will take years to reach the size and scale needed for a healthy sector in the city.

“Building out of the tech ecosystem is a long-term, multi-pronged strategy piece. The horizon on it is probably 10 years or more,” said executive chairman Bryan de Lottinville in an interview.

The company provides charitable donation management services for clients including Nike, Coca-Cola, Google, and Apple. It received an investment last year from British-based Hg Capital LLP that valued it at US$1.1 billion.

It has about 700 staff but, despite Calgary's unemployment rate of more than 10 per cent, has 90 open positions because it can't find people with the right skills, de Lottinville said.

Gray is part of a group urging city council to rethink the scope of its multi-billion-dollar project to extend the light rail transit system south and to the northeast.

The city should realize an economy built on 40 years of favourable commodity prices can't be turned around overnight, he said.

“We had this wonderful 40 years with all the big buildings downtown being built, but on a very narrow base and that was energy, oil and natural gas,” he said.

This report by The Canadian Press was first published March 14, 2021.