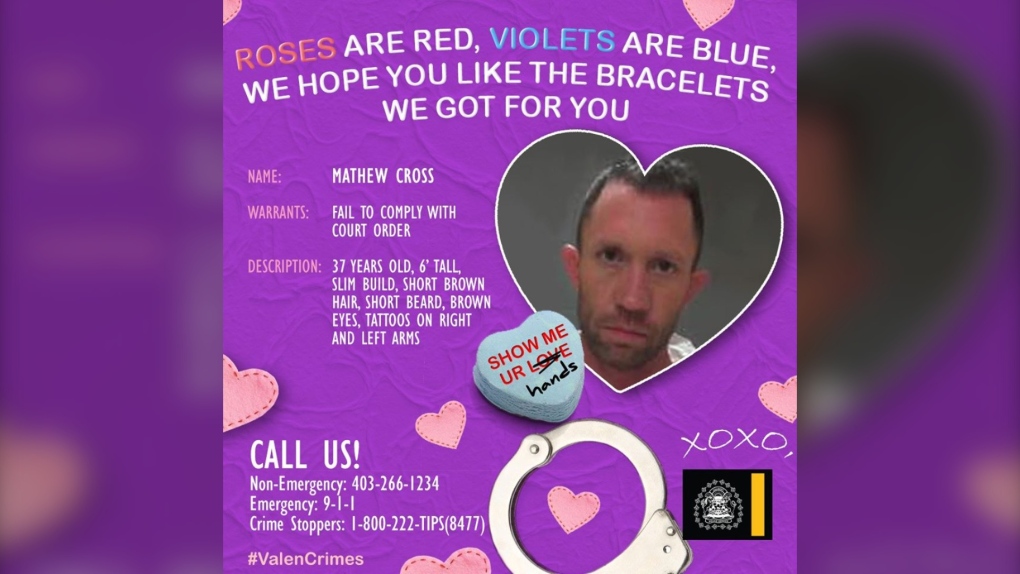 CALGARY -- For the second year in a row, Calgary police put out Valentine's Day cards on Facebook and Twitter addressed to people wanted on arrest warrants.

The seven cheeky cards posted to Twitter and Facebook featured mug shots of the accused along with candy hearts edited to include some police humour — "love bird" became "jail bird" and "call me" became "call lawyer."

But not everyone thinks the approach is appropriate. Some called on CPS to reconsider the Valentines, saying they were punching down by mocking people already on the margins.

“I think the best outcome in cases like that is rehabilitation, and re-introduction into society in a productive way,” said Joelle Haney, a teacher who says the tone of CPS tweets bothered her. "I don’t know how we do that if we are shaming people when they are in that roughest part of their lives."

Online, CPS defended the tweets, calling critics "trolls" and "keyboard warriors" with nothing better to do.

Some of those critics argued the accused -- three of them in their early 20’s — should be shown some compassion, saying non-violent offenders should be allowed some dignity.

A criminal justice prof from Mount Royal University says that love them or hate them, the posts are nothing too out of the ordinary.

"I think it’s kind of no harm, no foul," said Doug King, a criminal justice studies professor at MRU. "But is it ultimately effective as a form of communication? I think that still needs to be kind of raised."

The accused "Valencrimes" recipients faced theft and property crime charges, along with breach of probation and fleeing police.

No one from CPS was available to speak Monday.