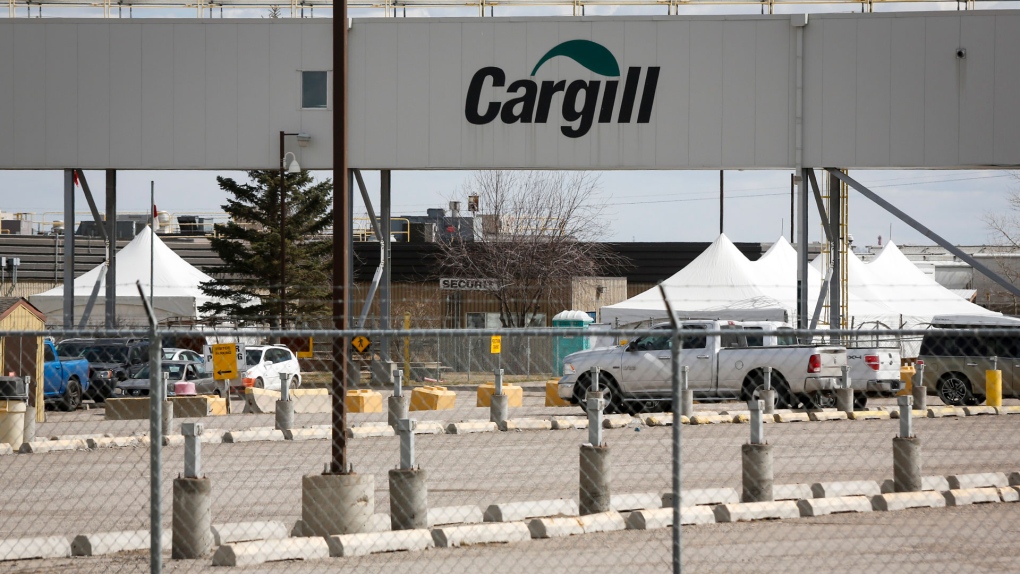 Cargill announced a temporary shut down of its beef plant near High River where officials in the area are dealing with over 400 cases of COVID-19 linked to the plant, including the death of a worker, in High River, Alta., Thursday, April 23, 2020. THE CANADIAN PRESS/Jeff McIntosh

CALGARY -- An organization that works with immigrants says the temporary closure of a large slaughterhouse in southern Alberta has left many among its largely Filipino workforce fearful for the future.

Cargill shut down its plant just north of High River, Alta., earlier this week after an outbreak of COVID-19 and the death of one employee. The decision put 2,000 employees out of work.

Marichu Antonio from Action Dignity said 70 per cent of the workers at Cargill are Filipino. There are also Mexicans, Chinese and Vietnamese working at the plant.

Her organization, previously known as the Ethno-Cultural Council of Calgary, assists new Canadians obtain services. She said it has received hundreds of calls from Cargill workers.

Antonio, who is originally from the Philippines, said people are worried about what happens after the plant reopens.

“The possibility of death is so real right now. They know the long-term implications to their families if something happens to them as the main breadwinners, so they're very worried They're afraid,” she said.

Antonio said the death of the Cargill worker in her 60s has hit many people hard.

“The woman who passed away was of Vietnamese descent. She took her sick day that Friday and then she was hospitalized Saturday and passed away Sunday.”

Cesar Cala, a co-convener of the Filipino Emergency Response Task Force, said a significant number of plant employees are temporary foreign workers here in Canada alone. There are also many with permanent resident status who have their families with them.

He said those who are sending money home often look to save expenses by moving in with other workers.

“Either they rent places or they make living arrangements with other workers from other businesses. It's a good way to save money.”

The cost savings go beyond living together.

“They car-pool. Most of them live in Calgary, so it saves a lot of money for them to go in a car-pool ... five of them going there together and coming back.”

Cala said workers are worried about their health and feeling pressure to head back to work, even if they are still showing symptoms. He said having a steady income is a priority for them.

“For a lot of the (temporary foreign workers), their employment and their status to stay in Canada is tied up to their employment. It's not just losing their jobs,” he said.

“It might be about losing their status as well. They've incurred so much cost coming to Canada and they're also quite anxious, because there's no clarity on what's going to happen and what's in store.”

Antonio said her group has been urging workers to tell their stories publicly.

“We've been asking them ... to share their stories and their reality, but they're afraid that they may not be rehired. There are many stories that they can tell.”

This report by The Canadian Press was first published April 25, 2020

WHO warns against 'immunity passports' as a ticket out of lockdown

'Herd immunity': Why this risky goal isn't practical for COVID-19