Despite anxious feelings in teens, it’s not ‘coronophobia,’ experts say

CALGARY -- Although COVID-19 is causing increased feelings of anxiety among Alberta's youth, it’s not believed be connected to an irrational fear of the disease — and local experts discourage the use of the term ‘coronaphobia.’

A study from the University of Calgary called COVID-19 & Student Well-being surveyed 1,689 students from both the Catholic and public school boards in Edmonton and Calgary in December.

The study’s lead says there is no baseline data pre-pandemic to compare these mental health responses to conclude a massive or a statistically significant change.

“Kids are experiencing this like the rest of us. This has disrupted major areas of their life. Their social lives, their academic lives, and their families,” said Kelly Schwartz registered psychologist and associate professor in School and Child Psychology.

Schwartz added the study is not a clinical study and did not reveal diagnostic cases of mental health disorders. 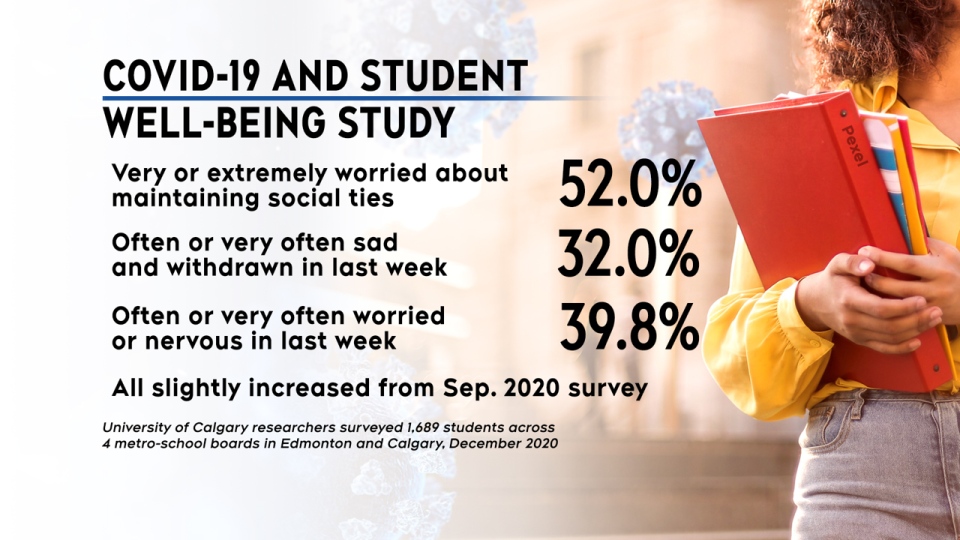 A teenager from Ernest Manning High School told CTV news that stress and sadness have become a part of her experience as a student during the pandemic.

“It’s stressful because a lot of the things are contradictory. We can see each other at school but it's still too dangerous to hang out outside of school,” said Elle Nyitrai, in Grade 11.

“It feels kinda sad sometimes, we’re almost missing out on our teen years.”

She says social interactions have been limited to times when schoolwork takes higher priority.

“It gets pretty lonely," she said.

A Grade 10 student at the same school also acknowledges the virus’ disruption to his high school experience but says it doesn’t get him down.

“It definitely sucks but whenever there’s annoyance and anxiety there’s always ways in some regard, that it’s better,” said 15-year-old Ronan Allen.

He tries to enjoy the present moment. 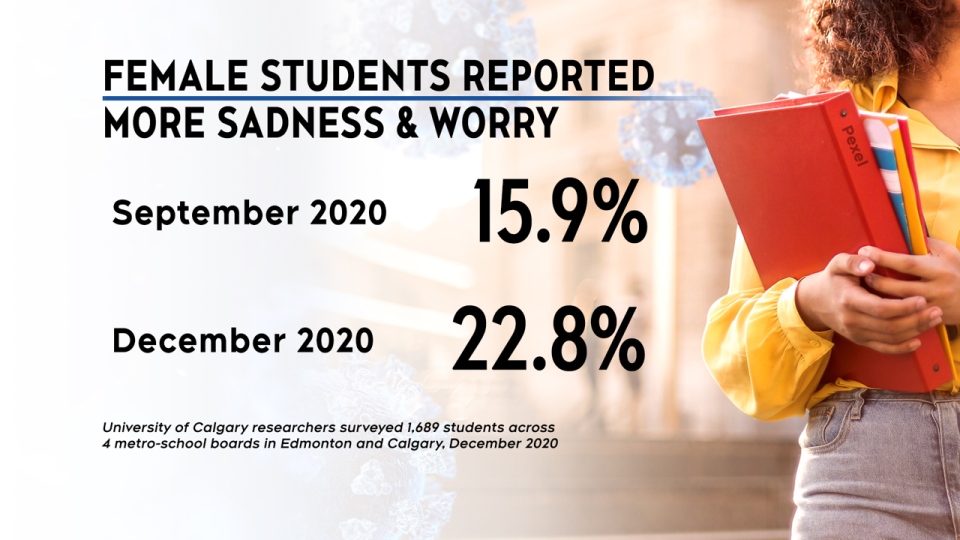 “What I’ve definitely from this pandemic is you could be able to hang out with friends today and not (be able to do that) tomorrow so I hardly I ever say no to things anymore. If someone calls me up, I don’t know if I will be able to do that tomorrow, that’s why I say yes today.”

A registered psychologist whose practise focussed on youths says the pandemic is impacting teens' natural processes of brain and social development, as many of her clients will often say “what’s the point.”

“There’s so much in terms of an overwhelm of uncertainty that it’s kind of playing out as just, a lack of motivation. It’s almost like getting stuck or a barrier or a wall,” said Chantal Côté, who is also a former school counsellor.

She says positive and loving relationships can help teens navigate this difficult time, so long as there is space for creativity, imagination and opportunities.

“Allow them to have the courage to dream. There’s a lot of uncertainty right now.”

As to whether there’s potential for the anxious feelings to be symptoms of an irrational fear of the virus, the department head of psychiatry at the University of Calgary calls it “nonsense.”

“There is no anxiety disorder called ‘coronaphobia’,” said Valerie Taylor.

The term is defined as “an excessive triggered response of fear of contracting the virus causing COVID-19 leading to accompanied excessive concern over physiological symptoms, significant stress about personal and occupational loss, increased reassurance and safety seeking behaviors, and avoidance of public places and situations, causing marked impairment in daily life functioning," according to a doctors in a study published by the U.S. National Library of Medicine.

It analyzed nearly 500 studies of anxiety and depression relating to the pandemic.

“It’s not an irrational fear to be concerned about the fact that we are in the middle of a pandemic and there are health measures that we need to follow,” she said.

Taylor says that if people are exhibiting a debilitating response to the coronavirus then its more likely they in fact have an anxiety disorder or hypochondriasis, excessive and undue worry about having an illness.

“I don’t think that the creation of nonsense terms is actually helpful for people whom have legitimate medical issues,” she said.