Details of the deal: How Calgary’s new arena deal breaks down

The city, the Calgary Flames and the Stampede agreed on terms for a new $550 million event centre on Monday evening and councillors will have until July 29 to consider the proposed deal.

Calgarians are encouraged to call or write their public representatives with feedback on the tentative deal and more information can be found on the city’s website.

A new arena would be built in east Victoria Park, in an area just north of the Saddledome. The design of a new event centre is still being finalized by the Calgary Municipal Land Corporation.

But what does the proposal actually mean for the city and the Calgary Flames?

Here is some of what council will have to consider when making a decision about whether or not to support the deal:

The Calgary Sports and Entertainment Corporation (CSEC) and City of Calgary will each pay half of the new arena’s $550 million price tag, but the building and land will be owned by the city.

The Flames will cover the costs for operations, maintenance and repairs over the course of the 35 year lease. The team will not be able to leave the city for 35 years.

As part of the lease, the Flames will get a majority of the revenue from every event at the new arena. The city will then earn a ‘facility fee’ by taking 2 per cent of the ticket revenue from events, but that is capped at $3 million a year for the first five years.

The city will also receive $250,000 per year for the first ten years from the naming rights to the arena. 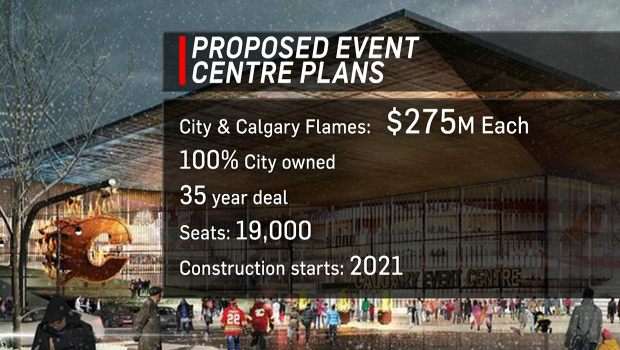 Since it’s owned by the city, there will not be any property taxes on the arena, though municipal property taxes will be charged to any street-facing restaurants and retail built at the new event centre.

The city will also be on the hook for most of the cost to demolish the Saddledome, which is estimated to be $12.4 million for the city and $1.4 million for CSEC (the Flames’ contribution to demolition costs won’t exceed $1.5 million).

If the deal is accepted on Monday, CSEC will have to donate $1.5 million annually to community sports in the city. The Flames will also create a ‘community engagement program’ at a cost of $200,000 per year, though it’s not clear what the program will be.

The Flames also have the option of acquiring and developing nearby land, including the site of the Victoria Park bus barns and the empty site where the Enoch House used to stand.

When the event centre is completed, the Calgary Stampede will be allowed access for 17 days each year.

Feedback for the proposed deal will be accepted until Monday and people can call the office of the councillor’s at 403-268-2430 or can email their thoughts to publicsubmissions@calgary.ca.