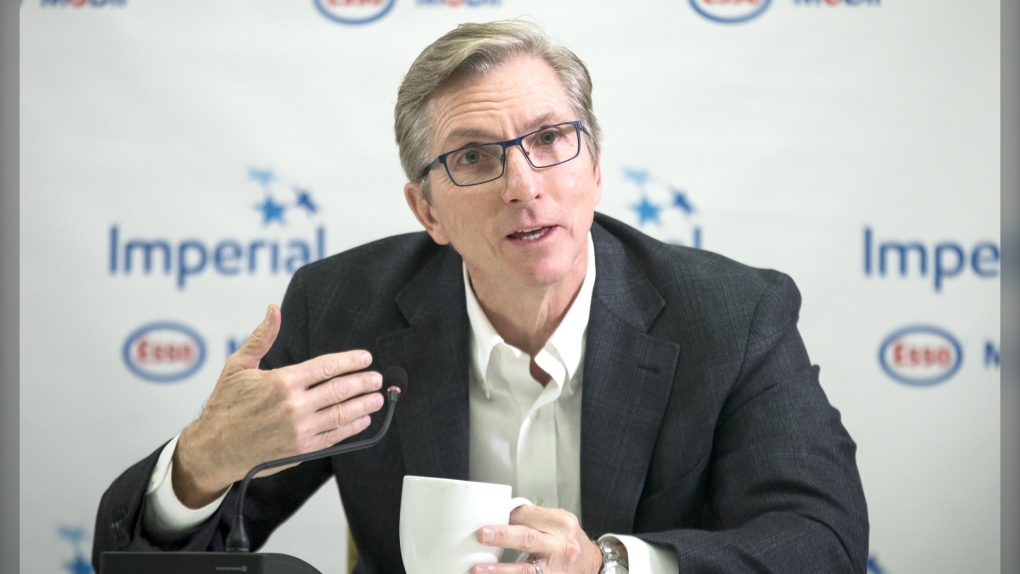 Rich Kruger answers questions during a news conference in Calgary in December during one of his last audiences with reporters before retiring as CEO of Calgary-based Imperial Oil Ltd. (Todd Korol/The Canadian Press)

CALGARY -- In one of his last interactions with reporters before retiring as CEO of Calgary-based Imperial Oil Ltd., veteran oilman Rich Kruger was typically plain-spoken when asked about the carbon footprint of the oilsands.

“We reduced the carbon intensity of every barrel we produce in the oilsands by about 20 per cent over the last five years. (But) we don't brag about it,” he said.

Asked about rival Suncor Energy Inc.'s just-announced plan to build a $300-million wind power project in southern Alberta, and Spanish energy giant Repsol's intention to invest in low-carbon electricity generation to get to net zero emissions by 2050, Kruger said his company isn't interested in spending just to appear to be more environmentally sensitive.

“We look at opportunities,” he said.

“If they can add (shareholder) value, and we believe they can be a material part of our future, we're certainly willing and have the ability to do it. We haven't found many of those yet.”

Bragging about carbon intensity reduction targets and adding renewable energy projects to earn credits to offset overall emissions is a trend with benefits for oil and gas companies that goes far beyond polishing reputations, observers say.

“The immediate risk for companies that don't have a plan around broader decarbonization is that they will exclude themselves from a bunch of the investor pools,” said Andrew Swart, a partner and global mining and metals leader for accounting firm Deloitte.

“That is the reality, that there is $35 trillion of capital attached to these principles. If you want to participate ... it means making real commitments and putting plans in place showing how you're going to get there.”

He added adopting technologies that cut emissions can also directly save money by reducing a company's overall energy bill.

Carbon neutrality, or “net zero,” means that any carbon dioxide released into the atmosphere from human activity is balanced by the same amount being removed.

Oilsands producer Cenovus Energy Inc. announced in early January it will aim for “net zero” GHG emissions by 2050, adding it intends to reduce its emissions per barrel by 30 per cent by 2030, while keeping flat its total emissions.

At an event three weeks later, CEO Alex Pourbaix said the reaction from investors, stakeholders and financial service providers has been “overwhelmingly positive.”

“I think the really meaningful goal for us was the 2030, 30 per cent reduction in carbon intensity,” he said. “That is a hard, firm goal that we want to get to and I think that positions Cenovus as a leader in this entire area.”

Carbon taxes like Alberta's Technology Innovation and Emissions Reduction system put a direct price on being less than green. Under TIER, emitters of more than 100,000 tonnes of greenhouse gases per year must reduce emissions, offset them with carbon credits or pay into a TIER fund.

“The valuation of many companies in the energy sector is based on its reserves, what kind of regime are the reserves under,” he said.

“They have to think about what kind of climate regime their reserves will be subject to.”

Vancouver-based Teck Resources Ltd. announced in early February it hopes to be “carbon neutral” by 2050 through innovation and switching to cleaner power sources. It's awaiting a decision from the federal government on its proposed $20.6-billion Frontier oilsands mine, expected to produce about four million tonnes of greenhouse gas emissions per year.

Oilsands producer Canadian Natural Resources Ltd. has also pledged to work toward a zero-emissions target without giving a specific date, using technology to improve efficiency and earning credits through its carbon capture and storage operations.

Environmentalists are split on the value of adopting corporate GHG emission intensity targets and diversifying into greener energy assets.

“I think what Cenovus is saying, in between the lines, is that they are working on breakthrough technologies that will allow them to reduce emissions after 2030,” said senior analyst Benjamin Israel of the environmental Pembina Institute, adding the company is setting a “great example.”

But energy economist Mark Jaccard, a professor in the School of Resource and Environmental Management at Vancouver's Simon Fraser University, said there's nothing new in energy companies vowing to reduce their environmental footprints - at some later date.

Such pronouncements are mainly designed to mollify governments and head off regulated emission reductions, he said.

“Stalling for 10 years isn't good enough in a world where Australia's on fire. In a global net-zero world, there won't be any demand for their product or enough offsets to counter the emissions they have,” chimed in energy strategist Keith Stewart of Greenpeace Canada.

In its 2019 Report on Sustainability, Suncor also commits to cutting total greenhouse gas emissions intensity of its upstream products by 30 per cent by 2030.

In his message in the report, CEO Mark Little says times have changed in the oilpatch.

“Climate change is real and we have a shared obligation to reduce our carbon footprint. The more people are engaged, the greater likelihood of success.”

This report by the Canadian Press was first published Feb. 16, 2020