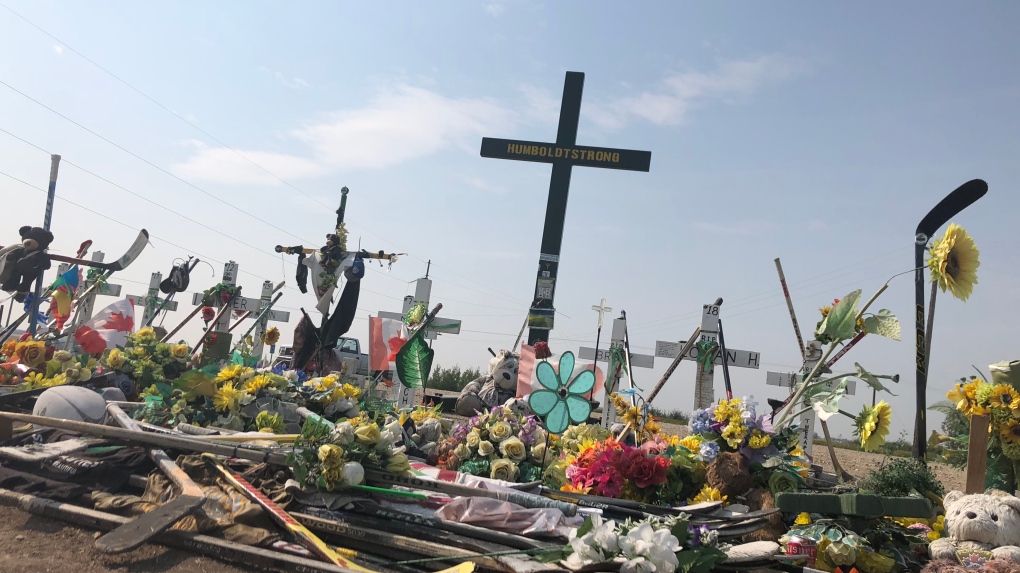 The memorial at the site of the Humboldt Broncos bus crash is shown on Aug. 21, 2018 (Angelina Irinici / CTV Saskatoon)

CALGARY -- A new advocacy group, that includes families of some of the victims of the Humboldt Broncos bus crash, is calling for improvements to Canada's commercial licensing system.

"We believe everyone deserves to come home safe, and that means ensure drivers are well trained," said Fair in a statement released Friday announcing the launch of Safer Roads Canada.

In April 2018, 16 members of the Humboldt Broncos organization died after the junior hockey team's bus collided with a transport truck at a highway intersection near Tisdale, Sask.

The driver of the truck, Jaskirat Singh Sidhu, had been hired by a small Calgary-based trucking company three weeks prior to the crash and had only received two weeks of training with another driver.  Sidhu received an eight-year prison sentence after pleading guilty to 29 counts of dangerous driving in connection with the crash.

"We commend Saskatchewan, Alberta, Manitoba and Ontario for already implementing mandatory entry-level training programs, but more needs to be done," said Ginny Hunter in the release. "A driver trainee in any other province or territory can still obtain a Class 1 licence and be insured without completing a mandatory training program and may operate extra-provincially across the country with trucks pulling multiple trailers, in complex weather and road conditions, all under the sole jurisdiction of Transport Canada."

According to the organization, there are approximately 400 fatal crashes in Canada each year involving heavy vehicles including semi-trucks and the current mandate of 103.5 hours of training for drivers falls short of what's required.